Here on Life with Lynnie (LwL), I will let you know about something.

It is something I received an e-mail about.

Here is the e-mail message from REBELNEWS (I copied/pasted):

Since the pandemic began, I have put on a protective face mask and visited the airport to report on the ever-continuing stream of flights arriving from foreign countries — including numerous daily flights from the COVID-19 homeland: China!

And it’s downright shocking to me that there is still no screening at our airports. No temperature tests. No face masks handed out to arrivals who then connect on to domestic flights — despite specific promises by Health Minister Patty Hajdu that this is happening.
But why?

After all, in my most recent visit to Toronto Pearson International Airport, I proved just how easy and fast it is to take people’s temperature upon arrival.

I brought my own remote thermometer, and nobody objected to having their temperatures taken — check it out: 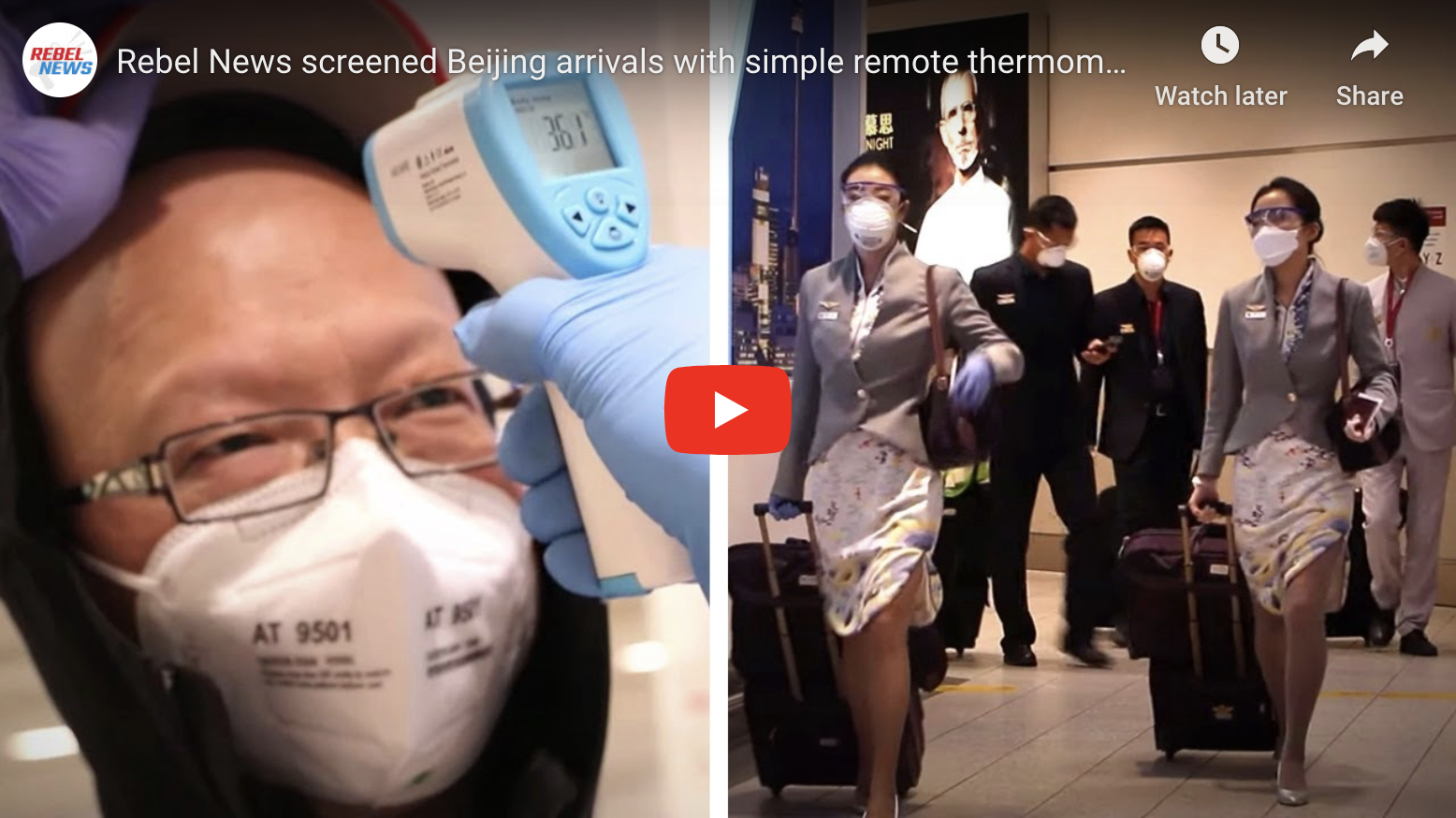 So, that being the case, what is stopping CBSA from ensuring that those who touch down on Canadian soil are doing so fever-free?

Nothing — other than sheer incompetence and mismanagement on the government’s side, of course.

P.S. It is profoundly disturbing how dangerously incompetent Trudeau and his ministers have been. But what’s almost worse is that so few reporters have bothered to fact-check Trudeau as we have at Rebel News. Because what his government is telling Canadians — that “enhanced measures” are in place — is simply not true. It is a lie. And his government might just have blood on its hands because of it.
Fortunately, though, my Rebel News colleagues and I are on the frontline exposing this tragedy for what it is. But unlike Trudeau’s favourite network, the CBC, we don’t receive $1.5 billion a year no matter what. We need your help to stay strong. So, if you can spare a few bucks to keep us going in this difficult time, please click here or visit HelpRebelNews.com to chip in. Thank you!

Not only did I read that e-mail message... I also watched that video.

If you couldn't see that video when you clicked on it in the e-mail message I received, then please... click on this link to that same rebelnews.com video that is on YouTube and is entitled, Taking Temperatures of Chinese Arrivals To Canada - Trudeau Refuses to Allow This:  https://www.youtube.com/watch?time_continue=335&v=DeDoW0z14Vk&feature=emb_logo.

It was upsetting to me... that Canada Border Services Agency (CBSA) which is a portion of the Government of Canada did NOT check out what temperature each person had, who had flown on that airplane... from China... to the Pearson International Airport (Toronto, Ontario, Canada).

It made me happy that David Menzies of REBEL NEWS... asked people and was able to use a thermometer to check their body temperature... as you will see when you watch that video.

Even though CBSA feels that the thermometer wouldn't work... as was mentioned on that video... it did!  As you can see, the body temperatures were shown.

Some people may think that those people were checked out before they got on that plane.

Even if that did happen, I believe that if Coronavirus did affect them and at that time if they seemed okay when they got on that plane... that could have changed.

Why?  Because their temperature could have changed and increased ... since it takes MANY hours to fly where they arrived... in Toronto, Ontario, Canada.

Does this also mean that people from OTHER  COUNTRIES are NOT  checked out when they arrive in Canada?  If so...  protection is NOT happening.

To me, it wasn't just upsetting regarding that situation since our Canadian government didn't do anything to protect us Canadians... here in Canada... even though ALL Canadians should be protected.

It was upsetting to me that our Canadian Prime Minister, Justin Trudeau... did NOT make CBSA check everyone arriving into Canada to see if they were being affected by Coronavirus.

As I've said before... I believe Justin Trudeau HATES Canada... especially since many years ago, he tried to separate the Province of Quebec from Canada... and in the future, if he is not re-elected, he may try to do that, again.

Yes, because I was born in the Province of Quebec, I am not just upset that he might do that in the future.

It upsets me that he is obviously NOT trying to protect Canada/Canadians... but may be hurting Canada as well... to be affected by him in the future.

Thinking about that, made me think about  Colossians 3:25, "But he that doeth wrong shall receive for the wrong which he hath done: and there is no respect of persons.".

Amen!  But he that doeth wrong shall receive for the wrong which he hath done: and there is no respect of persons.

Please... join me in prayer.

Please pray that Justin Trudeau will become a born again Christian... for if he does... then I believe he will then stop trying to hurt Canada and Canadians... and will gain respect.

Thank you for joining me in prayer.

If you do... I believe God will bless you.