There is something I feel you need to know about, here on Life with Lynnie (LwL).

Here is a link for an article  by rt.com that is entitled, 'Role Play'? Swedish schoolkids made to kneel in gender-segregated Muslim prayer & told to listen to Koran in Arabic:  https://www.rt.com/news/476711-sweden-pupils-muslim-prayer/?fbclid=IwAR1eWwsos_4YdQAnmiP2DOrR81DS2y2mJBwTVPunCiMQx59YFcHhcBEEyLU.

Did you read the article?  Here is what was stated (I copied/pasted): 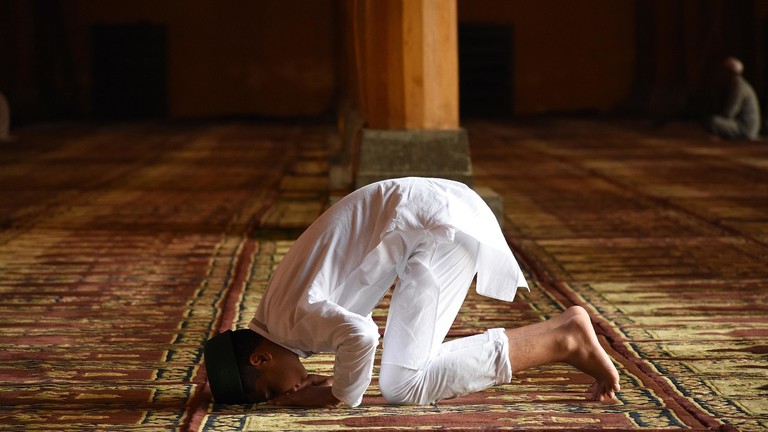 A Swedish school decided to familiarize its fifth-graders with Islamic worshipping by having a teacher recite Koranic verse to them and having them pray facing Mecca, in a bizarre set-up the educators called “role play.”
An offbeat “religion lesson” was taught at the Bjurbäck school situated in the south of Sweden, according to Samhallsnytt news outlet. An outraged parent said pupils were told to face the Kaaba and kneel on prayer mats, while the whole class was divided by gender, with girls forced to the back of the room.
His daughters “did not even want to be there because they could not understand a word of what the teacher read from the Koran in Arabic,” the man, called Markus, revealed. After the “prayer,” the pupils “would dance to Arabic music and eat Arabic cake” in something used to replicate Eid al-Fitr, the Muslim festivities marking the end of compulsory fasting.

Local authorities confirmed the report, with an education official in Emmaboda – a serene southern county where the school is located – telling the news outlet that the class did take place.
When confronted by angry parents, the school management defended the activity, referring to it as “role play.” But the awkward explanation didn’t sit well with Markus who wants the school to apologize and its principal to be suspended.
“Calling this a role play is not OK as it hits me as a parent,” he told the paper. “It’s me, not the school, that raises my children ... they go there to learn things that will stay with them for the rest of their lives.”
The story sparked uproar on social media.
“Of course, the continuation of it will be Muslim students learning the Lord’s Prayer and attending a Catholic mass,” one person suggested.
“Forcing minors into submission is disastrous. One should choose a religion on their own,” another one wrote.
However, the Emmaboda municipality tried to cool down tempers, saying that, while “his lesson was about Islam and Muslim rituals and traditions,” there are other classes teaching about other world religions.
The class in question involved “so-called role-play pedagogy where the students have different roles in order to gain a better understanding” of the subject, it explained. During the lesson, no student expressed concern or felt insecure, the authorities said, adding that taking part in the role play wasn’t compulsory.
A similar scandal broke out in neighboring Denmark this summer, when a boy of African descent was filmed teaching his third-grade classmates a daily prayer ritual, with the exercise ending with the class kneeling and chanting ‘Allahu Akbar’ (Allah is great). The school, however, defended the teaching methods used to integrate children of different cultures.

Sigh... I feel so terrible that people/children in school in Sweden are being taught/forced to become Muslim/Islamic.

People ARE being taught in a sinful way... in school... even though they are normal and are NOT Islamic schools.

Muslims believe they have god... who has taught them to convert EVERYONE in the world, to become Islamic/ a Muslim... and has also taught them that anyone who refuses, should have their heads cut off/murdered... which is being done to some people, in countries that are Islamic.

The person they think is god... is NOT.

Please realize that our God is the true God.

Thinking about that, made me think about  1 Timothy 2:5, "For there is one God, and one mediator between God and men, the man Christ Jesus;".

Amen!  For there is one God, and one mediator between God and men, the man Christ Jesus.

Please realize that our God... is the ONLY true God... and as I've mentioned in the past, our God DOES NOT want anyone to be killed/murdered!

Plus, our God wants us to preach the gospel to all the creatures of the earth.

So, now... I will let you know that you can gain salvation and everlasting life... by trusting in/believing upon our Lord, Jesus Christ... who God the Father sent Him, His Son, Jesus... to the earth... to give His life, to pay the price for the sin of the world... for all who will believe upon Him.

If you have, we'll spend eternity with Him... when our life on earth ends.

If you haven't, then when your life ends here on earth, you will spend eternity in Hell, separated from God... with NO chance of escape.

Hopefully, when both our lives end, here on earth, we will see each other in Heaven... and be always with Jesus... and will be truly blessed!