Here on Life with Lynnie (LwL), there is something I feel I need to let you know about.

It's actually about an e-mail message I received by Rebel News… a while ago, but was only able to share it with you, now (I copied/pasted):

I heard that Dalhousie University had invited Omar Khadr, the Al-Qaida terrorist, to speak to students.

I thought that was appalling, so I flew from Halifax to Toronto yesterday morning to attend the event.

Little did I know that Khadr would be on the same plane as me, just a few rows ahead of me.

He was sitting first class — that’s what you can do when Justin Trudeau gives you $10.5 million.

I didn’t recognize him when I boarded the plane because he hid his face from me. But I recognized him when we landed and he stood up.

I asked the flight attendant about it. Why was an Al-Qaida terrorist allowed on a plane? Why wasn’t the no-fly list being enforced? I asked the co-pilot the same question. Neither had any idea.

When I got off the plane, I saw Khadr with a group of his local fans who had come to meet him at the airport. I went up to him and asked if I could talk with him. I recorded the video: 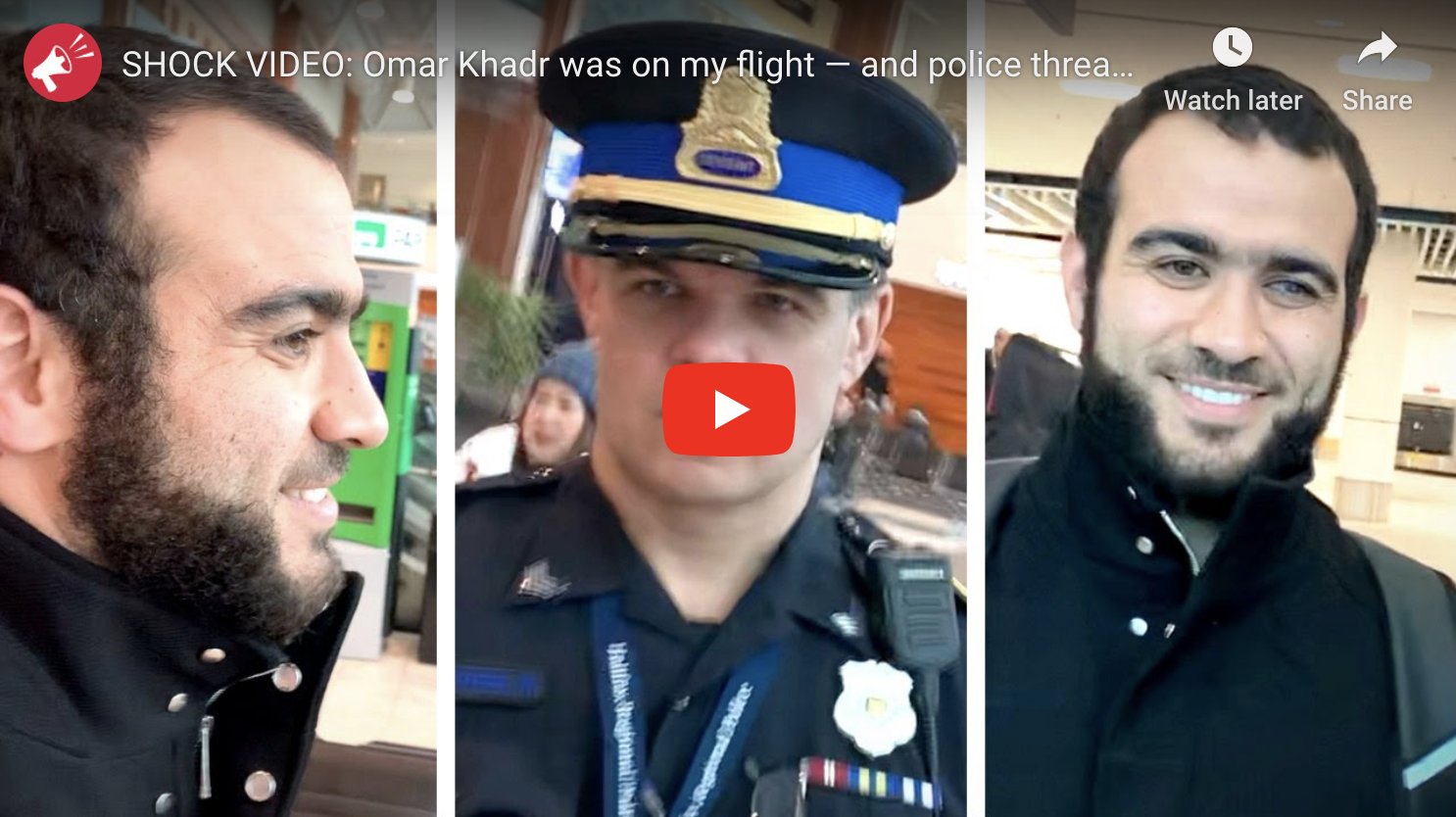 Can you believe it? Police threatened to arrest me. Not Khadr, the Al-Qaida terrorist — me. They called me a danger. I didn’t touch him or block him or swear at him — I tried to ask him some basic questions.

The police literally grabbed me and pushed me. What a disgrace.

Canadian police protecting an Al-Qaida terrorist’s “right” to fly on a passenger plane and threatening to arrest a peaceful journalist for asking about it.

We have to pursue this further. Why is a terrorist being allowed to fly? Is that a special favour that Trudeau did for him?

Khadr belongs in jail. Please sign our petition now, that I will deliver to the public safety minister: visit JailKhadr.com.

P.S. I was truly stunned with the “normalcy” of a terrorist swanning around an airport, after flying first class on a passenger plane. What is going on in Canada?

P.P.S. I’m going to make this an important project. The CBC is on Khadr’s side — they literally threw a champagne party for Khadr on TV last year. They try to white-wash his crimes. I promise we’ll get to the bottom of this. If you want to help us pay for our independent journalism, please chip in a few dollars, by clicking here.

Unlike Khadr, we didn’t get $10.5 million from Trudeau — we rely on Canadians for support. And that’s why we support Canadians, not terrorists. Please click here to help us out. Thank you.

I signed the petition!

If you haven't yet, please sign the petition, now... by clicking on this link:  https://www.rebelnews.com/jail-omar-khadr-petition.

Signing a petition is truly important.

And this is the confidence that we have in him, that, if we ask any thing according to his will, he heareth us: