Here on Life with Lynnie (LwL), I'll share something with you.

It's about being supportive of Don Cherry!

Don Cherry liked my dad, when he was alive.

Because my deceased dad... Richard Rutter (and my deceased brother, Glenn) not only taught people to play hockey, but my dad also helped get the original hockey building built that also had a pool... in Clarkson, which became part of Mississauga, in  Ontario, Canada, next to Toronto.

Plus my dad also helped create the original hockey team known as... Clarkson Algonquins.   Here is a pic with also pins of my dad/hockey: 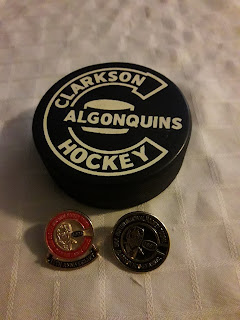 In fact, after my dad's life ended, Don Cherry actually arranged for people to play hockey IN Toronto... in support and remembrance of my dad.

As you may have read in the past, both my mom and dad were in the Canadian Army, during WW2.

Yes, I believe everyone needs to wear a poppy, to support veterans, military workers... and  Remembrance Day that is experienced November 11th, every year.

I received an article by rebelnews.com that is entitled, SUPPORT DON CHERRY:  Don Cherry is right about Remembrance Day Poppies!:  https://www.rebelnews.com/support-don-cherry-petition?utm_campaign=dm_don_cherry_interview&utm_medium=email&utm_source=therebel.

The article stated (I copied/pasted):


The day after a nation was rattled by the firing of a national icon simply for being politically incorrect (at least in the eyes of the usual suspects), I ventured to the Mississauga home of hockey legend Don Cherry, who talked to me about being an opinionated broadcaster in an era of cancel culture.
Do you support Don?
If so, please add your name to the tens of thousands and sign the petition at the bottom of this page.

Yes, I watched the videos in that article... and signed the petition!

Please... click on that link... read and watch what you feel you need... and sign the petition to be in support of Don Cherry... for he has shown love and done good work.

Thinking of that, made me think of Hebrews 10:24, "And let us consider one another to provoke unto love and to good works:".

Amen!  And let us consider one another to provoke unto love and to good works:.

God wants us to support.

By doing that God will bless us.