Here on Life with Lynnie (LwL), there is something I feel you need to know about.

It is about an article I saw a while back.

The article is by torontosun.com that is entitled, WHITE WIDOW:  Worldès most wanted woman plotting U.K. massacreÉ:  https://torontosun.com/news/world/white-widow-worlds-most-wanted-woman-plotting-u-k-massacre?utm_medium=Social&utm_source=Facebook#Echobox=1546275260.

Hopefully, you clicked on the link, and read the article.  In case you didnèt, here is what was stated (I copiedépasted):


She was once known as plain old Samantha Lewthwaite.
Today, she is known as the White Widow — the most wanted woman in the world.
The president of terrorism’s ladies auxiliary is reportedly secretly plotting a mass casualty terror attack in London.
The 35-year-old became radicalized by her late husband, Germaine Lindsay, who was one of the suicide bombers in the 7/7 2005 terror attacks in London.
Now believed to be hiding in Yemen, Lewthwaite allegedly ordered the deaths of some 400 people, according to the Daily Mirror.
Hiding in Africa, she is believed to have plotted massacres in Kenya, Somalia and Tanzania.
Intelligence sources told the newspaper that the mother of four may have had plastic surgery and put on weight to change her appearance.
Now, those same sources suspect she is planning an attack on London, citing intelligence gathered by the British Secret Service in Nairobi, Kenya.
“She remains our No. 1 target and we believe the net is finally closing in. We will get her,” one intelligence operative told the Mirror.
“Yemen is a hotbed for Al-Shabaab recruitment and its chaotic political situation gives an advantage to on-the-run terrorists like her.”
Interpol issued a Red Notice arrest warrant for her after she was linked to the 2013 Westgate Mall attack in Kenya, which left 71 people dead and about 200 injured.
It’s believed her other handiwork includes the massacre of 148 people at a university in 2015.
Intelligence sources say she is recruiting female suicide bombers with $500 bribes.
Her typical M.O. is to send suicide bombers stoned to their eyeballs on heroin to do her dirty work.
Lewthwaite has vowed to raise all four of her children — from three different fathers — to become jihadis.
Wow!

Here is a picture of Samantha Lewthwaite: 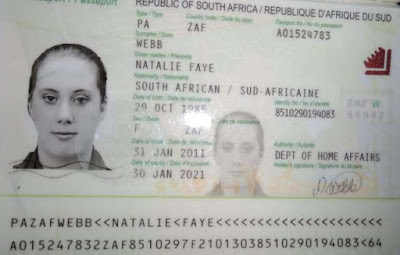 Amazing.  Well, at least to me, she is amazing.  And, sinful... for hurting people.

Should anyone hurt people?

Anyone who hurts others, will pay for it with God.

Thinking of that, made me think of James 4:7, "Submit yourselves therefore to God. Resist the devil, and he will flee from you.".

Amen!  Submit yourselves therefore to God. Resist the devil, and he will flee from you.

If this person and other people who have hurt others, submit themselves to God... they will be... forgiven.

Being forgiven is so very important.

If a person becomes a born again Christian, then they will repent from sin.  And, will be forgiven.

This also means that no one will want to be hurtful to people.

For this, I'm thankful.  And, always will be.