Here on Life with Lynnie (LwL), I'll be letting you know about something.

It's something that is happening in UK... meaning England.

Well, I believe you need to read an article that I'm sharing with you, by britainfirst.org that is entitled, Christian children bowing to Allah: Britain First investigates Islamic indoctrination in Dorset schools:  https://www.britainfirst.org/christian_children_bowing_to_allah_britain_first_investigates_islamic_indoctrination_in_dorset_schools.

Did you click on the link and read the article?  I hope you did, for I believe you needed to read it.

In case you couldn't, I decided to share what was stated (I copied/pasted):


In a teaching profession dominated by leftists and multiculturalists, political and religious education has too often provided a cover for indoctrination of children.

And, though almost every aspect of mainstream British life has been shaped by Christian belief and values, there's been a growing tendency for schools to treat Christianity as just one among many, instead of giving it the prominence it merits in the school curriculum.

Many parents are unaware of the brainwashing of their children, or else feel powerless to stop it - which is why Britain First works to expose indoctrination and support parents who oppose it.

Until recently, schools in Dorset, south-west England have been mercifully Islam-free, but in the last few years left-liberal teachers have begun pushing the Islamic agenda.

For example, in May 2018, St Nicholas Church of England Primary School in the village of Child Okeford invited Dorchester's new Islamic Centre to provide an 'Introduction to Islam'.

Below are some photos of the event, from the school's website: (please know that I didn't share all the photos, but you'll see some below.)

In 2015, Bovington Primary School in Wareham wrote the following in a gushing report of a class visit to a Bournemouth mosque:

'When we arrived, we were greeted by our guides, and given a warm welcome. All adults and children removed their shoes before stepping inside the prayer room as this is part of the Muslim culture.'

'Guides were very informative, we found out about the types of clothing Muslims wear, the routine of washing before prayer, the five pillars of Islam. Then the children were shown how Muslims pray.'

Accompanying photos (copied from Fahrenheit211 blog, as the originals appear to have been removed from the school's website) show white British children in Mohammedan garb, others kneeling and bowing to Allah on prayer mats or the carpeted floor of the mosque:

A particularly disgusting irony of this visit is that many of the parents were British Army servicemen based at Bovington Camp, some with personal experience of the bloody reality of Islam in Afghanistan and other Middle Eastern hellholes.

Unsurprisingly, several parents complained, prompting headteacher Juliet Muir to remark that she was 'really saddened to read some of the negative comments both on Facebook and sent to school with regard to this trip'.

Far from being 'saddened', Britain First is encouraged by the 'negative [i.e. spirited and defiant] comments'.

We invite parents (in Dorset or elsewhere) worried about political, sexual or religious indoctrination in schools to email us confidentially at: elections@britainfirst.info (subject: Schools).

With new mosques and 'Islamic cultural centres' springing up across the county, Britain First West and East Dorset branches will vigorously oppose the targeting of local schools with Islamic propaganda.

If you read the article, you would have also seen pictures of children in school.  Here's a couple pictures I'm sharing with you. 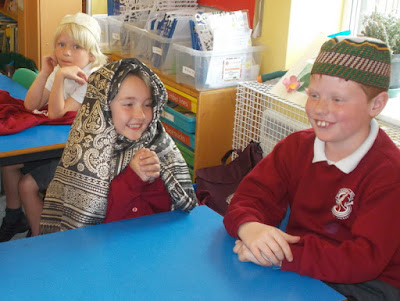 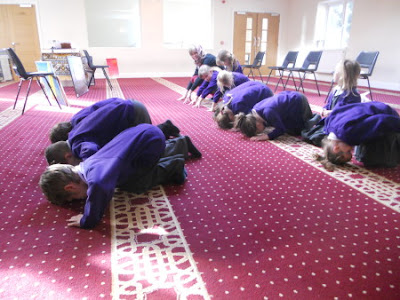 How awful is that?!

To me, it's truly awful.

Why?  Muslims are doing what their god has told them to do.  For their god wants every Muslim to convert everyone in the world, to become Islamic.  But, if people don't become Islamic, then Muslims have the right to cut off their heads, meaning murder them.

Muslims are doing all sorts of things and requesting things to happen, that will help people give up their religion, even Christianity, to learn a bit about Islam, and become a Muslim.

And, Muslims are being allowed to do that.  Not just in England, but also in some other countries.

Yet, the schools don't allow children/students to learn about being Christian... and/or/learn about Jesus, who will provide salvation for anyone who becomes born again.  Even though they need to.

Just as we read, in John 3:3, "Jesus answered and said unto him, Verily, verily, I say unto thee, Except a man be born again, he cannot see the kingdom of God.".

Amen!  Jesus answered and said unto him, Verily, verily, I say unto thee, Except a man be born again, he cannot see the kingdom of God.

If you are born again, then you have trusted in/believed upon our Lord, Jesus Christ, and gained salvation and everlasting life, so that you can spend eternity with Him, and be in Heaven, the kingdom of God.

If you aren't yet born again when your life ends here on earth, then you will spend eternity in Hell... separated from God... with NO chance of escape.

Tomorrow, may be too late.