There's something I will be sharing with you, here on Life with Lynnie (LwL).

As I'm sure you know, today is the day when we recall what happened early in the morning, in 2001.

On Facebook (FB), a person shared a picture with some information regarding what happened that day.  Here is the picture... 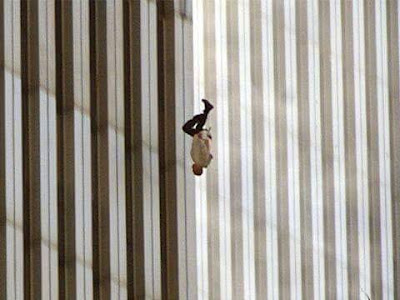 Here is the information that was posted with the picture (I copied/pasted):

At fifteen seconds after 9:41 a.m., on September 11, 2001, a photographer named Richard Drew took a picture of a man falling through the sky—falling through time as well as through space. People on the ground were gasping because people in the building were jumping. He started shooting pictures through a 200mm lens. He was standing between a cop and an emergency technician, and each time one of them cried, "There goes another," his camera found a falling body and followed it down for a nine- or twelve-shot sequence.

The picture went all around the world, and then disappeared, as if we willed it away. One of the most famous photographs in human history became an unmarked grave, and the man buried inside its frame—the Falling Man—became the Unknown Soldier in a war whose END we have not yet seen.

Never forget that 19 radical Islamic terrorists, funded by Saudi Arabia and Iran, did something we never thought possible on US soil. 3,000 Americans were killed. Over 20,000 Americans were maimed as a result of that single Islamic terrorist attack. The media want you to blame yourself, not the perpetrators. The media want you to forget and pretend it never happened. Never forget. Those who forget the past are doomed to repeat it.

I won't ever forget that day, that day pisses me off even more than the Iranian crisis in '79. Because it happened here.

Of course, many people think that Islamic terrorists are not Muslim.  But... they were on 9/11 and still are, even now.

Even though it was heartbreaking what was done, we needed to not do evilness to Muslims.

Just as God told us in His Word, the Bible, in... Romans 12:17, "Recompense to no man evil for evil. Provide things honest in the sight of all men.".

Amen... we need to not return evil for evil.  We need to provide things honest in the sight of all men.  Just as I am doing, by speaking truth.

Pray... for people who were injured, plus family and friends of all who were murdered and/or injured.

Pray... that governments of every country will not allow things like that to happen again, anywhere.

Pray... that Muslims and anyone else who is not a born again Christian will trust in/believe upon our Lord, Jesus Christ for then they will gain salvation and everlasting life... and will be forgiven for any sinfulness they have done.