There's something I feel I need to let you know about, here on Life with Lynnie (LwL).

To me, it is amazing!

It's not something that happened for everyone.  However, it did happen for me.  And, for many other people.

Last week, on Tuesday, August 28, 2018, I went to the Reaume Park, which is one part of a large area known as different park names.  It's located at Pillette Rd., and Riverside Dr. E., here in Windsor, Ontario, Canada.  This park area is closest to where parking can be done by vehicles, so it was good for me to be there!

Of course, I didn't just go there to spend time by myself.  I actually went there to be with people attending a picnic for Injured Workers!

It was truly wonderful being there!  Not only did we all enjoy food we brought.  I believe that everyone like me, was happy to have been able to see many other people we've met/known that were also injured workers.  :)

Here is a photo of most of the people who attended the Injured Worker's Picnic! 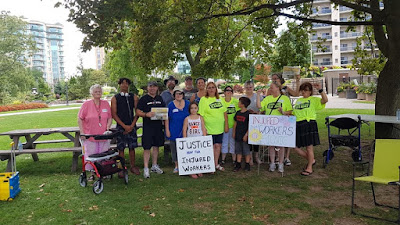 Of course, yesterday was Monday, September 3rd, 2018.  That day is known here in Canada and in some other countries, as Labour Day!

About 9:00 a.m. a group of people met at a location where union workers and injured workers met.  Unfortunately, I wasn't able to meet others there, because I knew I couldn't walk the distance they were going to walk as a parade.

When I drove to Fogular Furlan hall/park area, I was shocked at how many vehicles were parked along the main road leading to where Fogular Furlan is located.  Although much of the parking area was shut off so parking could not be done, people like me, who couldn't walk extreme distances, were able to park close to where the celebration was taking effect, outside of the hall.

Wow!  It was amazing to me, how many people were there!

Especially, after all the parade walkers arrived there!

Here's a photo of the beginning group of parade walkers that took close to a half hour just to walk into the area where much was happening: 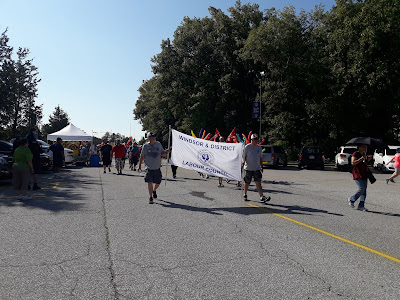 How wonderful it was seeing people doing the parade walking!

There was a lot done in that park area.

Various worker groups were located there.  Including injured workers.

Many items were offered to everyone attending.  Of course, given by various groups who were set up to have everyone come and see them.

Water and pop (also called soda... in various places) were available and given to everyone attending.

Music was played.  Music was done by locals as well.

Plus, a speaking event happened.

It was truly amazing to me how wonderful it was!  And, amazing about how many people attended!

When I went to leave the area, I had to slowly make my way towards the main road.  When I approached the roadway, there were about a half dozen police cars.  Yes, they took control over who could drive in various areas.

Afterwards, I went to both my daughter's homes to see some of my family just for a few minutes.

To me, it was truly a blessing.

Why?  Because it was wonderful seeing so many people.  Not just family, but also seeing supporting workers and injured workers.

Yes, I was thankful.  I felt truly blessed.

Thinking of that, made me think of Philippians 4:19, "But my God shall supply all your need according to his riches in glory by Christ Jesus.".

Amen!  But my God shall supply all your need according to his riches in glory by Christ Jesus.

How amazing it was that He did this.

He provided me to be able to see some of my family members.

He did supply that celebration to honour workers and injured workers.

He supplied that to help me... and others feel blessed, also.