Here on Life with Lynnie (LwL), I'll be sharing something with you.

It's something that I received by e-mail.  It refers to the issue I discussed yesterday, here on LwL.

It's about how our Canadian Prime Minister, Justin Trudeau allowed a convicted terrorist to go to India, when he, his wife and family, plus other Canadians went to India in February, 2018.

Here is what the e-mail stated and showed (I copied/pasted):


Dear Lynn,
Justin Trudeau invited a convicted terrorist, Jaspal Atwal, to attend a state dinner in India.
Atwal was convicted of attempted murder — he tried to assassinate an Indian cabinet minister who was visiting Canada.
And Trudeau thought it was appropriate to invite him on his week-long junket to India. 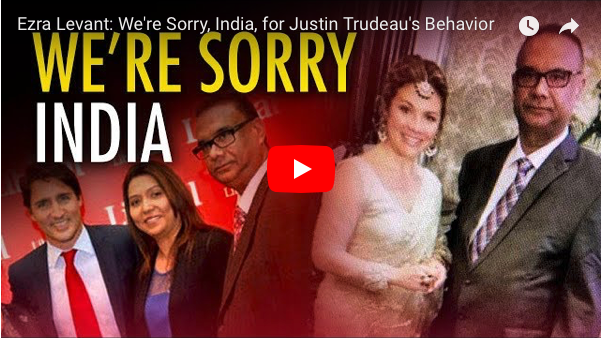 Just yesterday, Trudeau was grilled by an Indian politician for being too friendly with violent Sikh extremists in Canada. It’s a big reason why Narendra Modi, India’s prime minister, has so far refused to meet with Trudeau on this trip.
It was bad enough that Trudeau spent the week in India partying on the taxpayer’s dime, with only half a day’s worth of real meetings. It’s just another luxury vacation for him and his family.
But now Trudeau has shown the world’s largest democracy just how poor his judgement is when it comes to terrorism.
India is a great democracy, and a natural ally of Canada. We simply have to let them know that Trudeau’s misconduct doesn’t speak for all Canadians.
Please sign our petition at www.WereSorryIndia.com to let them know that we are just as appalled as they are at Trudeau.
Yours truly,
Ezra Levant
P.S. It’s important that we remain loyal to Canada in any dispute between our country and a foreign country. But this isn’t a dispute — it’s Trudeau insulting India, and sending a message that our country is soft on terrorism. We’re not, and we need to tell them that. Please sign the petition here.
P.P.S. The media in India has been hostile to Trudeau — partly because of the bizarre costumes that he and his family have worn throughout the whole trip, like they are at a dress-up party. But imagine inviting someone who tried to kill an Indian cabinet minister to a diplomatic function in India! Since Trudeau hasn’t apologized, we have to apologize for him. Please visit www.WereSorryIndia.com.

Then, after clicking to see the YouTube video and further information regarding signing the petition, here is what was stated (I copied/pasted):


We’re sorry India — please don’t think all Canadians are like Justin Trudeau and his family and friends. We’re not.
For example, thousands of Canadians visit the beautiful Taj Mahal every year — and none of us demand that 35,000 pilgrims be forced to wait outside, in the heat, for sixty minutes while we take our photos there, just to have a better picture, like Trudeau and his family did.
We’re sorry India — please don’t think that’s how most Canadians are. We actually try to be polite.
We’re interested in Indian culture and food and music and people — we have many great Indians in Canada, as I’m sure you know. Not all Canadians put on bindis and wear Indian clothing when we go to an Indian restaurant, and say "namaste" all the time. When most Canadians meet Indian people, we can stay calm. We don’t have to pretend we’re at a costume party, or that Indians are a curiosity in a museum.
But most of all, please don’t think that Canadians support terrorism. Like you, we were shocked to learn that Justin Trudeau invited a convicted terrorist to dinner. A man who was found guilty of attempted murder against an Indian cabinet minister.
The Trudeaus have known Atwal for a long time — Justin Trudeau even met with Atwal back in Canada. For Trudeau to work with a convicted terrorist is inexcusable — and we have no excuses, other than to say that’s not who Canadians are. We’re peacekeepers, not terrorist supporters. We don’t support breaking up your country.
We love India — we are both Commonwealth countries that have achieved great things since our independence. We’re both democracies. We could do a lot more business with each other — we’d love to sell you our oil, so you don’t have to buy it from OPEC. We’d love to sell you more food. Unfortunately, Trudeau didn’t invite our energy minister or our agriculture minister on his junket — I guess there wasn’t room for both them and Jaspal Atwal.
Please don’t think we’re all like Trudeau. Our last prime minister, Stephen Harper, deeply respected India and became good friends with prime ministers Modi and Singh. And please don’t think that Indo-Canadians support terrorism. A very small minority might — but not most Canadians.
So, we’re sorry India.

Click on this link, in case you didn't get to see the YouTube video entitled, Ezra Levant:  We're Sorry, India, for Justin Trudeau's Behavior:  https://www.youtube.com/watch?v=ceu_7IvUCLY.

Hopefully, you clicked on the link and watched the video.  To me, it was truly a blessing, because people from India were truly being loved.

Love is so important.  Even if it is for other people and/or other countries.  And, even if there is evilness.

Thinking of this, made me think of Matthew 5:43-44, "Ye have heard that it hath been said, Thou shalt love thy neighbour, and hate thine enemy.
44 But I say unto you, Love your enemies, bless them that curse you, do good to them that hate you, and pray for them which despitefully use you, and persecute you;"

Amen!  We have heard it said, Thou shalt love thy neighbour, and hate thine enemy.  But, I say unto you, Love your enemies, bless them that curse you, do good to them that hate you, and pray for them which despitefully use you and persecute you.

Yes, I've actually done this.  Not just to other people who have hurt me, but also to people like Justin Trudeau, who is hurting us Canadians.

I pray for him.

If you do, I believe God will bless you.