I'll let you know, here on Life with Lynnie (LwL), that I attended with a group outside of Workplace Safety and Insurance Board (WSIB), on Monday, December 11th, 2017.

Even so, about 40 of us who support injured workers, met and held signs showing what we thought people needed to read.  Here are pictures of both sides of the sign I held and showed to cars driving by where we were. 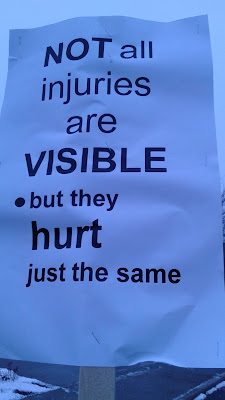 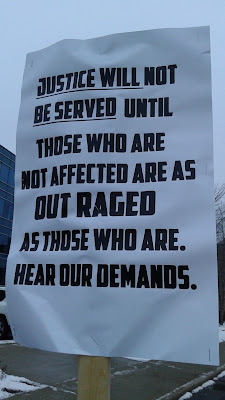 There were other signs with various messages, but I didn't get pictures of them all.

However, I did take a few pictures of some of our group.  Unfortunately, I didn't get a picture of everyone who attended the protest at WSIB.  Even so, I am sharing one picture with you. 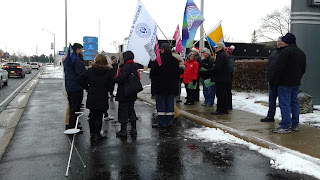 This picture is rather unique.

Not just because of some of the people who protested together at WSIB.  This picture also shows a cane I brought from which I could use to sit on.  :)

I brought that cane with the seat, because even though it was extremely cold, I couldn't stand up for the whole hour we were there.  This way, I sat off and on near the side of the road, so that drivers could read the messages that I showed you, earlier.

To me, it was truly a blessing having about 40 people attend this protest.  Especially, since not everyone who attended was an injured worker.  Some were those who support injured workers.

Thinking of people supporting injured workers, made me think of Acts 20:35, "I have shewed you all things, how that so labouring ye ought to support the weak, and to remember the words of the Lord Jesus, how he said, It is more blessed to give than to receive."

Amen!  Those who were with us, support the weak... injured workers.  What they have done is truly a blessing, for they are doing for others and not receiving for themselves.

For this, I am truly thankful.

Thank you... each person who came and supported injured workers at the protest in front of the building where WSIB is located.  May God bless you.

I thank God, for He put it on the hearts and minds of those who came to support injured workers, at the protest of WSIB.  He is truly wonderful!