I'm sad about what I need to discuss today, here on Life with Lynnie (LwL).

Was it mentioned here in Canada?

Truly, I can't say.  I didn't see it on our Canadian news.  But, it may have been shown for a moment or less.  I don't know.  I may have missed it.

I can tell you that bbc.com posted an article entitled, Egypt Coptic Christians killed in bus attack:  http://www.bbc.com/news/world-middle-east-40059307.

Did you click on the link?  Did you read it?

If you couldn't, I'm sharing only a small amount of what was written (I copied/pasted):

The bus was travelling to the Monastery of St Samuel the Confessor, 135km (85 miles) south of Cairo, from Minya province when it came under fire.

No group immediately said it was behind the attack.

But Islamic State (IS) militants have targeted Copts several times in recent months, and vowed to do so again.

Two suicide bombings at Palm Sunday services at churches in the northern cities of Alexandria and Tanta on 9 April left 46 people dead.
Another suicide bombing at a church in the capital in December killed 29 people, while a Christian community was forced to flee the town of el-Arish in the northern Sinai peninsula after a series of gun attacks in February.

That article didn't really say much, to be honest.

Here is a link for another article posted by msn.com entitled, Gunmen kill 26 in attack on Christians in Egypt:  http://www.msn.com/en-ca/news/world/gunmen-kill-26-in-attack-on-christians-in-egypt/ar-BBByrvb?li=AAadgLE&ocid=spartanntp.

Here is what was written (I copied/pasted):

CAIRO, May 26 (Reuters) - Gunmen attacked buses and a truck taking a group of Coptic Christians to a monastery in southern Egypt on Friday, killing 26 people and wounding 25 others, witnesses and the Health Ministry said.

Eyewitnesses said masked men stopped the two buses and a truck and opened fire on a road leading to the monastery of Saint Samuel the Confessor in Minya province, which is home to a sizeable Christian minority.

Security forces launched a hunt for the attackers, setting up dozens of checkpoints and patrols on the desert road.

The grand imam of al-Azhar, Egypt's 1,000-year-old center of Islamic learning, said the attack was intended to destabilize the country.

"I call on Egyptians to unite in the face of this brutal terrorism," Ahmed al-Tayeb said from Germany, where he was on a visit.

Coptic Christians, who make up about 10 percent of Egypt's population of 92 million, have been the subject of a series of deadly attacks in recent months.

About 70 have been killed since December in bomb attacks on churches in the cities of Cairo, Alexandria and Tanta.

Those attacks were claimed by Islamic State. There was no immediate claim of responsibility for Friday's attack. (Reporting by Ahmed Aboulenein, Omar Fahmy and Mohamed Abdellah; Writing by Giles Elgood; Editing by Louise Ireland and Gareth Jones)

Hopefully, you read the article.  If you did, you will have seen the photo of the bus.  I'm sharing it with you: 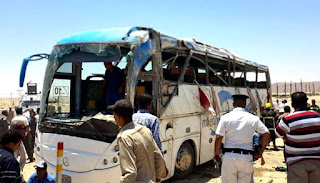 I don't believe those Christians did.  But, they were.

Those of us, here on earth, need to pray and trust God to do what He can for us.  Of course, we don't know His will for our lives.

However, we need to be able to stand against anyone who is doing work for the devil.  Like those Muslims did.

Just as we read, in Ephesians 6:11, "Put on the whole armour of God, that ye may be able to stand against the wiles of the devil."

In order to stand against the wiles of the devil, we need to put on the whole armour of God.

After all, anyone who attacks like that is doing work of the devil.  Satan.

How can you figure out what the armour of God is?

He'll reveal it to you.

And, you'll be blessed.