Today, I'll be doing something again, here on Life with Lynnie (LwL).

I found a disturbing but not surprising article posted at WND by Leo Hohmann. The title: EX-OBAMA ADVISER ROOTS FOR MORE ISIS SLAUGHTERING OF CHRISTIANS. The ex-Obama adviser: Mohamed Elibiary.

Elibiary adviser job: He “served five years on President Obama’s Homeland Security Advisory Council and was instrumental in the rollout of Obama’s countering violent extremism pilot program, which took the heat off of Islam as the inspiration for global terrorism.”
The theme of the article from Hohmann:
“On Sunday, he stepped back up to the plate and delivered a stinging tweet against the Middle East’s largest Christian community – the Coptic Christians of Egypt.
In its latest magazine, ISIS threatened more attacks on Egypt’s Christians.
So what was the reaction from Elibiary?
He says Egypt’s Copts have it coming”. (Bold text by Editor)

The United States does not want nor need what has been happening to the various countries in Europe with the invasion of Muslims.

Muslims will not assimilate into the American culture and Sharia Law is not compatible with the U.S. Constitution. Islam is a political and military system masquerading as a religion.
Their prophet Mohammed was a pedophile rapist, slaver and mass murderer.
Muslims believe the infidels will have to convert to Islam, be enslaved or be killed.
Muslims can lie to the infidel to promote Islam called Taqiyya, so they cannot be trusted.
The Muslim Brotherhood calls for a **“Civilization-Jihadist Process,” in which they would destroy the Western civilization from within.
They said they would use the Constitution, such as the First Amendment right of Freedom of Religion against the U.S. to further their goal of World Islam.
They state, we do not want to democratize Islam, we want to Islamize democracy. That is what we want. “We Will Raise The Flag Of Allah In The White House.”
They will try to push Sharia law on this country if the American people do not wake up.
Again, Islam is not compatible with the U.S. Constitution and the American culture.

A photo was also used on the article.  I'm sharing it with you, here: 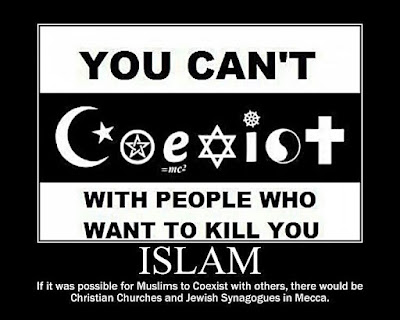 Like I've said in the past, truth is very important.

Not just truth about what is happening in our world.  And, what will happen in the future.

The most important truth, is what we learn in God's Word, the Bible.

Just as we read, in Ephesians 6:14, "Stand therefore, having your loins girt about with truth, and having on the breastplate of righteousness;"

Yes, we need to stand having our loins girt about with truth, and having on the breastplate of righteousness.  After all, truth (T) and righteousness (R), are very important to obtain.

How does this happen?

Like I mentioned already, we need to read God's Word, the Bible.

Of course, in order to understand, and accept what is said to you, you must have already gained salvation by trusting in/believing upon our Lord, Jesus Christ.

Then, when you read God's Word, the Bible, you'll learn and understand truth.

If you haven't yet done this, please... do it today.

Tomorrow, may be too late.