Every now and then, I share something with you that I've received by e-mail, here on Life with Lynnie (LwL).  Today, I'll be doing it.

Recently, I received an e-mail from therebel.media.  I copied/pasted the message so you can see it.  Here it is:

M103 is what the government has touted as an "anti-Islamophobia" motion, but in reality, it's little more than a blasphemy law against freedom of speech.

The vote may have been lost, but the battle is far from over.

Here is my immediate reaction to the motion passing: 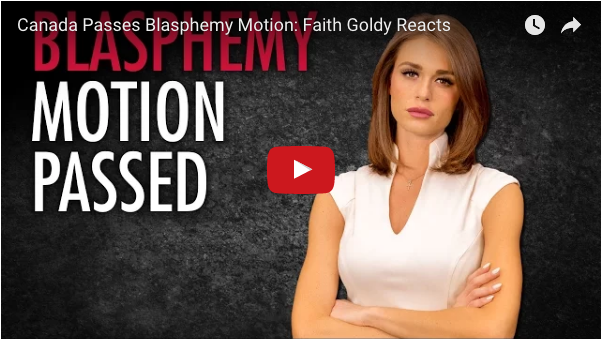 Next, a House of Commons committee will be tasked with studying Islamophobia and developing a "whole of government" approach to eliminating it.

That's where our next fight lies.

What we need to do now is continue our opposition to the motion.

Please share our petition with your friends and family at www.FreedomToOffend.com and help fight this dangerous motion.

According to our Charter of Rights and Freedoms, we’re all equal. Every individual — not a belief system or an ideology — is equal before and under the law. We all have equal protections and benefit equally from the law.

Muslims do not get special treatment or protections.This isn't about "Islamophobia." It's about freedom of speech. If I want to criticize a religion or an idea, I should have every right to do so.

The Rebel is committed to this fight, and we're glad to have you with us.

P.S. Please fight against the addition of a blasphemy law into Canada. Go to www.FreedomToOffend.com and sign and share our petition.

Hopefully, you read the e-mail message I received.

If you couldn't access the next page by clicking on the video/pic, then please click on this link that I decided to share with you, so you could watch the video on YouTube that is entitled, Canada Passes Blasphemy Motion:  Faith Goldy Reacts:  https://www.youtube.com/watch?v=RdSihRRXJso.

Please realize that the reason for this being shared with you, is so that we Canadians can try to fight to have our Freedom... affected.  Yes, our Freedom of Speech, has been taken away by the motion done by our government.

Now, it's not just in our province of Ontario.  It's now done federally.  This means that everyone who lives anywhere in Canada, has LOST their FREEDOM OF SPEECH!

Unless it can be continually fought against.

Just so you know, after I wrote this LwL entry, I came across another article by therebel.media entitled, Freedom To Offend, that I believe you need to take a look at, so I'm now adding it for you to see: https://www.therebel.media/freedom-to-offend-free-speech-not-sharia.

Why do I think you should see this?  Because, it is supporting what I have said in the past, about how M-103 will open the door for Muslims to bring Sharia Law into Canada.  If this happens, they won't live by our Canadian laws... and they will work to finish changing Canada into an Islamic country.

As was said earlier in today's LwL entry, our Canadian Prime Minister, Justin Trudeau has done this.  He's hurting our country in many ways.

Not just financially.  Definitely by taking away some of our Freedom.

Thinking of this, brought to mind, 1 Corinthians 10:32, "Give none offence, neither to the Jews, nor to the Gentiles, nor to the church of God:"

Justin Trudeau should not offend any of us.  Not Jews, Gentiles, or anyone who is part of the church of God.  Just as we read in today's Bible verse.

My brothers and sisters in the Lord, please... pray that Justin Trudeau will come to Christ, and gain salvation by trusting in/believing upon Him.

By doing this, he will become saved and spend eternity in Heaven with Him after his life here on earth ends.  Just as ours does.

However, by him becoming a born again Christian, he would also read God's Word, the Bible.  Then, he would realize how wrong he's been to people.  Including all of us Canadians.