Once again, here on Life with Lynnie (LwL), I feel the need to share something with you.  A message I received by e-mail.

The message was from therebel.media and was entitled, Teen girl sexually assaulted by refugee at school dance.  I copied/pasted the message; here it is:

A 14-year-old Canadian girl has been sexually assaulted by a Syrian migrant.

It was supposed to be a night of innocent fun and giddy excitement — her first high school dance — but for one girl at New Brunswick’s Fredericton High School, the night would go on to haunt her well after the last song was played.

Watch my entire report in the video below, but please note that I describe the attack, so this video is not for children. 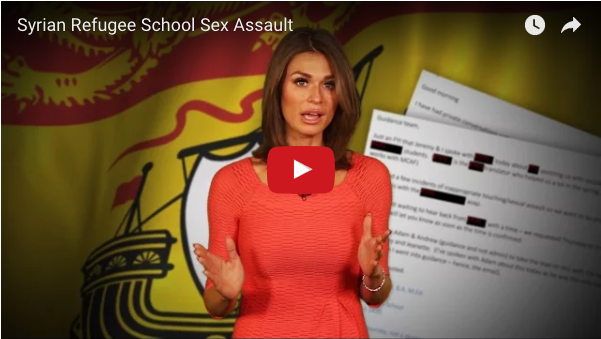 The young girl was approached by two Syrian migrants who are enrolled at her Canadian high school.

Both attempted to "grind" with the 14-year-old girl before one of the migrant students came up behind her, and aggressively touched her — her body and her breasts — before forcing his hand down her pants, touching her vagina from inside her underwear.

And worse yet, the school tried to cover everything up. They appeared to be too scared of the repercussions for standing up to refugees.
Click here to read my shocking report on this despicable attack.

Even the police were aware of the sex assault; however, following a questionable interaction between the young girl and one detective, there is now no sign that charges against the Syrian men will be pressed.

The Syrian migrant student was suspended for just one week and is now back at school.

Meanwhile, the 14-year-old girl has missed several weeks worth of school and is seeing a mental health professional to help her cope with the trauma.

We at the Rebel sought to verify the sex assault allegations before presenting this young girl’s story.

And so, we followed up with the school. We filed an access to information request. We informed Fredericton High School of our tip and asked that they provide any information regarding the alleged sexual assault in question.

We received shy of one dozen pages of email transactions between teachers and school administrators, all of which authenticated our source’s story.

You can click here to read all of the repulsive emails we attained.

Please watch my report and help spread the word. The school, the police, and especially the mainstream media never want to talk about the ongoing assaults that refugees are committing. But with your help, we can force them to address this issue.

P.S. Over the course of the past eight months, I have presented a dozen reports, based on over 3,000 pages of documents, covering five different Canadian provinces, all on the topic of Syrian students abusing their peers. You can go to www.SchoolyardScandal.com to watch all of my reports.

If you read it, you'll know that a 14 year old girl was sexually assaulted by a Syrian refugee.

Islam teaches Muslims that it is okay to rape women.  And, to do more to hurt women.

Is this what we should want?  I don't believe so.

Muslims want Sharia Law... which allows rape to happen.  Their god has taught them it's okay to rape.

This is totally against what our God wants.

Just as we read in Ephesians 5:3 (NIV), " But among you there must not be even a hint of sexual immorality, or of any kind of impurity, or of greed, because these are improper for God’s holy people. "

Just as we read in today's Bible verse, sexual immorality, or any kind of impurity, or greed, are improper for God's holy people.  It's sin.

Are you God's holy person?

Do you belong to Him.

Are you His family member?

If not, when your life ends here on earth, you will spend eternity in Hell, separated from God... with no chance of escape.

All anyone needs to do is to become God's family member to not have that happen.  If you are His family member, when your life ends here on earth, you'll have life in Heaven for eternity.  Forever.  With Him.

What do you need to do to obtain what is needed to become God's family member?

Trust in/believe upon our Lord, Jesus Christ, and you shall be saved (Acts 16:31).  Obtaining salvation makes you a God's family member.

If you haven't yet come to Christ, do so... today.

Tomorrow may be too late.