Here I go again, discussing something here on Life with Lynnie (LwL), that I feel is VERY important.  Again, it relates to an e-mail I received.

The issue is important to me, because our Prime Minister, Justin Trudeau and his liberal government group is in the process of removing our Free Speech.

Here is what I received by e-mail (I copied/pasted):

Canada is on the verge of passing a law that would prohibit criticizing Islam.

Prime Minister Justin Trudeau’s government is proceeding at a breakneck pace to address an unproven report about a rise in “Islamophobia” in Canada. And he’s going to do it by curbing your right to free speech.

Yet no one in the media is reporting on this anti-"Islamophobia" motion M103 before Parliament — except me. 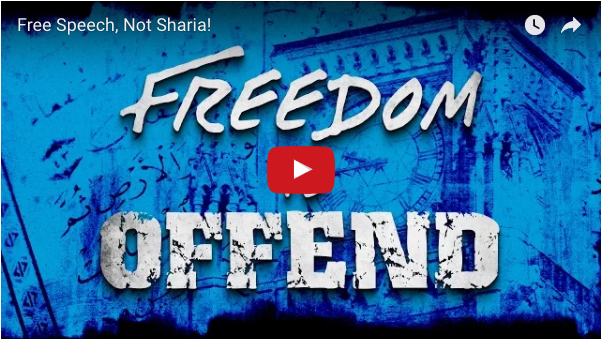 Newsflash: This unfounded anti-Islamophobia legislation flies in the face of our Constitution and its embedded Charter of Rights and Freedoms.

Sharia law and its related speech codes are not a reasonable limit on my freedoms.

If I want to point out the fact Mohammed married a six year old and slept with a nine year old; if I want to depict him in a cartoon; or, if I think women ought to be viewed as equal to men in the eyes of the law, and that striking at the necks and arms of unbelievers is draconian and downright antithetical to Canadian values — it’s my right to do so.

That’s because, according to our Charter of Rights and Freedoms — we’re all equal. Every individual (not a belief system or ideology) is equal before and under the law.

We all have equal protections and benefit equally from the law. This might shock you; however, Muslims do not get special treatment or protections.

I want you to join me in demanding that this motion be rescinded and exposed for what it is: A blatant attack on free speech and, as such, an assault on the very cornerstone of our Canadian democracy.

Will you stand with me in telling this Liberal government that it is in the public interest to allow ALL Canadians to freely discuss Islam — as we would any other religious belief system — without fear of recrimination or persecution by law?

And I want to go one step further: I want to demand that our legislators roundly denounce any further so-called "Islamophobia" initiative as antithetical to Canadian values and vote them down — in defence of our inherent and fundamental right to free speech.

So I launched a petition at FreedomToOffend.com that calls on our legislators to stand up for free speech, even offensive speech.

The government is not going to proactively ask for your opinion or let you have your say before they vote on implementing this freedom restricting legislation.

That's why you need to have your voice heard now!

Go to FreedomToOffend.com and remind our politicians that it’s their job to defend our Constitution — our rights and freedoms.

P.S. It was an online petition about "Islamophobia" that began this freedom silencing, and that petition had over 70,000 signatures. I want our petition to beat that. Please click here and sign my petition, but then forward this email to everyone you know and post www.FreedomToOffend.com as your new status on Facebook. Help us spread the word and help fight for freedom of speech!

Click on this link by therebel.media, to see the link offered in the e-mail message above:  http://www.therebel.media/freedom-to-offend-free-speech-not-sharia.

If you clicked on the link for the video, you'll have been able to see the video and read the article.  If you didn't, please read the following information (I copied/pasted) from the article by Freedom to Offend:


Canada is on the verge of passing what amounts to Islamic blasphemy laws.
Prime Minister Justin Trudeau’s Government is quickly proceeding to address unproven increases of “Islamophobia”— and he’s going to do it by curbing the right to free speech.
The government’s anti-Islamophobia initiative began in the form of a seemingly innocuous online petition presented to Canada’s House of Commons. Citing no evidence whatsoever, the petition made a bold claim that Islamic terrorism has been used as a pretext for a "notable rise of anti-Muslim sentiment in Canada".
The petition called upon the House of Commons to recognize that terrorists are not real Muslims by condemning all forms of Islamophobia, with no exact definition of what they meant by the term.
That request — with no evidence, not a single case of Islamophobia cited, virtually no public input, and zero attention from the mainstream media — received unanimous consent by Canadian MPs.
The petition was followed in rapid-fire fashion by a second motion sponsored by Liberal MP Iqra Khalid which called for the Standing Committee on Canadian Heritage to produce findings and recommendations within 240 calendar days of the motion’s acceptance. Titled “Systemic Racism and Religious Discrimination,” the Motion M 103 demands that the government not only condemn Islamophobia in word but that it also develops a whole-of-government approach to reducing or eliminating Islamophobia.
And so, it’s anticipated that legislative remedies — legal options — will be front and centre in the Committee’s efforts going forward.
In short: The Canadian government is preparing to silence anyone who criticizes Islam.
Their anti-Islamophobia motion (which will, in all likelihood, be voted on during this parliamentary session) resembles a kind of blasphemy law in favour of one preferred religion above all others. If this motion passes,
If this motion passes, Canadians can be persecuted for expressing any criticism of Islam, even when warranted.
This unfounded anti-Islamophobia legislation flies in the face of our Constitution and its embedded Charter of Rights and Freedoms.
Sharia law and it’s related speech codes are not a reasonable limit on my freedoms.
According to our charter of rights and freedoms — we’re all equal. Every individual (not a belief system or ideology) is equal before and under the law. We all have equal protections and benefit equally from the law.
Muslims do not get special treatment or protections.
Join me in demanding that this motion is rescinded and exposed for what it is: A blatant attack on free speech, and so an assault on the very cornerstone of our Canadian democracy.
The government is not going to proactively ask for your opinion or let you have your say before they vote on this motion.
Considering they voted unanimously in support of the petition that started this sharia creep in our federal legislature, there’s a damn good chance this thing will pass — that is, of course, unless we make our voice heard.
If you agree, please sign my petition below and remind our politicians that it’s their job to defend our Constitution — our rights and freedoms.

Our legislators must denounce any legislative initiative to curb our fundamental right to free speech.

Please... click on the link.  And, sign the petition.  Realize that freedom of speech is very important.

After all, in the past... our government has made it our right to have freedom of speech.

And, our military people... like my dad and mom, who were both in the Canadian Army, during WW2, did their best to fight the war, not just to win, but to allow our rights to remain, in addition to the rights of the countries that were being attacked.

As a Canadian, if you don't speak up, our rights may be removed.

Prayer is so very important.

If we ask whatsoever in His name, He will do it, that the Father may be glorified in the Son.

For this, we must be thankful.  And, pray.

Especially, when something is happening in life, that can take away what He gave us, in the past through efforts of people who cared for us.

Please, sign the petition.  After all, our Canadian government is not reaching out to remove freedom of speech for others to condemn Christians, and/or any other groups, including religious groups.

If you do this, God will bless you.