If you read yesterday's Life with Lynnie (LwL) entry, you'll know that I began to address an issue regarding e-mail I received.

Today, I'll be providing information that hopefully will help that female that e-mailed me, understand what I have said.  And, why.

The first part, is regarding how Muslims worked with Nazi's during WW2.

Here's a link by en.wikipedia.org, who posted online information regarding Hitler and Muslims during WW2 entitled, Relations between Nazi Germany and the Arab world:  https://en.wikipedia.org/wiki/Relations_between_Nazi_Germany_and_the_Arab_world.

If you read that article, you'll know it said (yup, I copied/pasted):  "Prior to the Second World War, all of North Africa and the Middle-East were under the control of European powers. Despite the Nazi racial theories which denigrated Arabs as members of an "inferior Semitic race"[citation needed], many Germans made exceptions for some Arabs who assisted the Reich in fighting the British for possession of the Middle East. Mufti Haj Amin al-Husseini, for example, "was granted honorary Aryan" status by the Nazis for his close collaboration with Hitler and the Third Reich.[10][11][page needed]
The German government developed a cordial association and cooperated with some Arab nationalist leaders based on their common anti-colonial and anti-Zionist interests. The most notable examples of these common-cause fights were the 1936–1939 Arab revolt in Palestine and other actions led by Grand Mufti Haj Amin al-Husseini, and the Anglo-Iraqi War, when the Golden Square (four generals led by Rashid Ali al-Gaylani) overthrew the pro-British 'Abd al-Ilah regency in Iraq and installed a pro-Axis government.[12][13][14]
In response to the Rashid Ali coup, Hitler issued Führer Directive No. 30 on 23 May 1941 to support their cause. This order began: "The Arab Freedom Movement in the Middle East is our natural ally against England."[14] "

It's really important to read that article.  It's also important to see that the article has a photo I'm sharing with you: 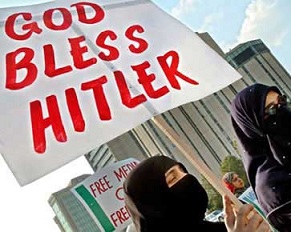 This pic shows that Muslims wanted their god (not ours) to bless Hitler.

Here's another pic you hopefully saw on that article: 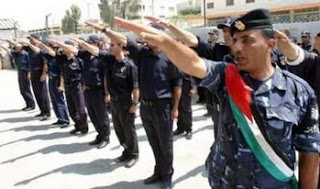 Here's YouTube videos that everyone needs to watch/listen to:

The Truth about ISLAM and HITLER:  https://www.youtube.com/watch?v=cefi9QYxU9A&nohtml5=False.

This shocking video Muslims don't want you to see!!:  https://www.youtube.com/watch?v=7Gzyeo1Z1I4&ebc=ANyPxKpF0eoZ0_BEEkYd8Bf4KuvjHmuB_ZhOQ4cdC9iJ_FMSGU4xOuL4JqYxyls5ZSyPZSWT0PIn0Mf4ElT5fdYfymNtcvG8SQ&nohtml5=False

I must admit, not everyone realizes that Muslims worked along with Hitler, during WW2.  In fact, I didn't know years ago.

However, when my now deceased husband Gordon and I visited Morocco many years ago, we saw Marrakesh, Casablanca and Tangier.

When we were in Tangier, we hired an individual person to show us the city.  We must admit, we did appreciate the person's work.

In fact, this was when we first (1st) heard that Muslims were involved in WW2, with Hitler.

We were shown a building that Hitler built.  It was vacant at the time.  Apparently, Hitler only finished building it, just before the war ended, so he and his Nazi's didn't use it.

Hitler's plan was to use it as a radio station, so that he could have allies or anyone trying to get through the Gibraltar area, would be able to hear the Nazi's and Muslims tell them information.  The reasons we were told, was so that they could get people to commit to working with them, or else they would be attacked.

Hmmm... this was very interesting.

Our tour guide told us more and more.  This opened the door for us to do research on the internet, and found out that Muslims did work with Hitler.  Not just in Morocco, but in various countries, as you just saw links for information.

Just so you know.  I heard that the building we were told that Hitler built and didn't get to use, is now used by a Christian organization, who is able to us it as work for our Lord, through radio.  For this, I praise God!

After all, God did not send Jesus into the world to condemn it.

Just as we read, in John 3:17, "For God sent not his Son into the world to condemn the world; but that the world through him might be saved."

God sent Jesus, so that the world, through Him... might be saved.

As I said previously, we are to preach the gospel to all the creatures of the earth.  And, we are to speak truth.

Of course, not all Christians do this.

Muslims, don't do what we Christians who love and want to be obedient to our God, do.

They all don't do what their god would have them do, either.

As I said previously, Muslims are to convert the world, peaceably if possible, and if not... they should cut off our heads.

Does this mean they are different than every other Muslim we see living in various countries?

In one way, they are not different.  For those, what are called terrorist groups, are basically Muslims who are committed to doing what their god would have them do.  What they all are taught in their Mosques, by their Imams.

Yes, they are different in another way.  After all, not all Muslims have committed their lives to do what their god wants them to do, yet.

But, as I said previously, all Muslims have been taught what they need to be doing for their god.

And, in countries around the world, Muslims have only committed to doing what their god wants them to do, when they have a large number of Muslims, there!

Here in Canada, we have Muslims.  But, I believe we do not yet have as many as they feel they require to do a lot of work for their god, here.

Still, in the past, our government stopped some Muslims from attacking.  I pray this will continue to happen, but am doubtful, since our new Prime Minister, Justin Trudeau, is in support of Muslims.  And, promised them, before being elected, that he would give them more rights.