I'm going to discuss something, here on Life with Lynnie (LwL) that I did, last Saturday.

Some churches either charge if/when they show a movie.  Or, some ask for a donation of a pre-planned amount.

But, my church family offered the movie being shown that night... FREE!  (We also received snack items and bottles of water... FREE!)

If you are a Facebook (FB) friend, you may be aware of that event.  After all, I created a FB event, that I shared several times... and invited people.

Even so, not many people showed up.

I didn't count the number of those who came to enjoy the film.  But, in my mind, I guessed there was about 35 people, or maybe a few more.

On my way to the FREE movie night event, I picked up a friend who doesn't drive.  We arrived, and found that my friend C, who doesn't worship with my church family, was there.  She brought four (4) people with her.

So, between me and my friends, we were seven (7) people.  Meaning about 20% of those in attendance!

I thought there would be many more people there, to see the movie.

All I can say, is that anyone who didn't join us, missed out on seeing one of the best films I believe I have ever seen!  :( :)

What was the movie's title?  Do You Believe? 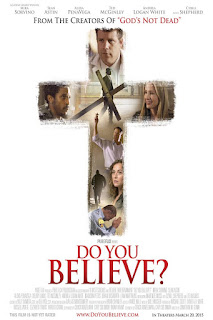 Have you seen... Do You Believe?

During some discussions, I realized that some of my church family were like me.  They had also seen the movie, before they joined in that evening.

In my mind, it is one of the best movies I have ever seen.

Of course, because the Lord is discussed!  But, also due to the way they not just wrote the movie, but how it was actually filmed.

Do You Believe? truly touches my heart.  Especially, since some people gained salvation, in the film!

Why?  Because, gaining salvation is very important... to... everyone!

Just like God's Word, the Bible, tells us in John 3:16, "For God so loved the world, that he gave his only begotten Son, that whosoever believeth in him should not perish, but have everlasting life."

Yes, all anyone has to do to gain salvation, is to trust in/believe upon our Lord, Jesus Christ (Acts 3:16).

Have you gained salvation?

If not, and if your life ends here on earth, you'll spend eternity in Hell, separated from God, with no chance of escape.

If you have gained salvation, you'll spend eternity in Heaven, with God!  And, with me...

Hopefully, I'll see you there, some day.