Mark of the Beast!

Yesterday, if you read Life with Lynnie (LwL), you're probably aware that the Thrifty Car Rental vehicle I was given to use, had a license plate number I didn't like.  The last three (3) digits were... 666.

You need to know that when I first saw this car and was offered it to me, I refused to accept it.

However, after trying to locate a vehicle like what I had originally reserved online, it was upsetting to realize they didn't have any.  So, I ended up with this vehicle, even though I didn't really want it.  Here's a pic of the license plate: 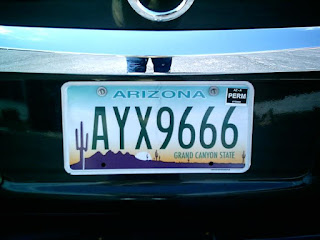 To me, this was truly horrible.  It reminded me of the mark of the beast.

Just as we read, in Revelation 13:11-18, "And I beheld another beast coming up out of the earth; and he had two horns like a lamb, and he spake as a dragon.
12 And he exerciseth all the power of the first beast before him, and causeth the earth and them which dwell therein to worship the first beast, whose deadly wound was healed.
13 And he doeth great wonders, so that he maketh fire come down from heaven on the earth in the sight of men,
14 And deceiveth them that dwell on the earth by the means of those miracles which he had power to do in the sight of the beast; saying to them that dwell on the earth, that they should make an image to the beast, which had the wound by a sword, and did live.
15 And he had power to give life unto the image of the beast, that the image of the beast should both speak, and cause that as many as would not worship the image of the beast should be killed.
16 And he causeth all, both small and great, rich and poor, free and bond, to receive a mark in their right hand, or in their foreheads:
17 And that no man might buy or sell, save he that had the mark, or the name of the beast, or the number of his name.
18 Here is wisdom. Let him that hath understanding count the number of the beast: for it is the number of a man; and his number is Six hundred threescore and six."

In some ways, thinking about that number 666, I found myself chuckling.

Especially, since I felt I had been treated badly by Thrifty Car Rental, even though that fellow assisted me, after I suffered greatly.

I was sort of reminded about how life can be so difficult.

Because, God is good.  And, He's with me always.

Just as He is always with all of His children.

Are you a child of God?

Have you gained salvation by trusting in/believing upon our Lord, Jesus Christ?

If you have gained salvation by trusting in/believing upon our Lord, Jesus Christ... then, you are saved.  You are a child of God.

For this, you should always be thankful.  Just as I am.