Here on Life with Lynnie (LwL), I always address special occasions such as this one... being Good Friday.  The day when our Lord, Jesus Christ fulfilled God the Father's plan of redemption for us.

As in the past, I've used Bible verses, today.  However, I also decided to share with you an e-mail I recently received.  Here it is:

THE (SCIENTIFIC) DEATH OF  JESUS

At the age of 33,
Jesus was condemned to the death penalty.

Each nail was 6 to 8 inches long.
The nails were driven into His wrist. Not into His palms as is commonly portrayed. There's a tendon in the wrist that
Extends to the shoulder. The Roman guards knew that when the nails were being hammered into the wrist, that tendon would tear and break, forcing Jesus to use His back  muscles to support himself, so that He could breathe.

Both of His feet  were nailed together. Thus He was forced to
Support Himself on the single nail that  impaled His feet to the cross. Jesus could not support himself with His legs for long because of the pain, so He was forced to alternate between arching His
Back and using his legs just to continue to breath. Imagine the struggle, the pain, the
Suffering, the courage.
Jesus endured this
Reality for over 3 hours.

Yes, over 3 hours! Can you imagine this kind of suffering? A few minutes before He died, Jesus stopped bleeding. He was simply pouring water
from his wounds.
From common images we see wounds to His hands and feet and even the spear wound to His side...
But do we remember the many wounds made to his body. A hammer driving large nails through the wrists, the feet overlapped and a nail hammered through the arches, then a
Roman guard piercing His side with a spear. And...
Before the nails and the spear, Jesus was whipped and
beaten. The whipping was so severe that it tore the
Flesh from His body. The beating was horrific.
The Crown of thorns (two to three inch thorns) cut deeply into His scalp. Most men would not have survived this torture.

He had no more blood
To bleed out, only water poured from His wounds.  The
Human adult body contains about 3.5 liters (just less than a gallon) of blood.     Jesus poured all 3.5 liters of his blood;
He had three nails hammered into His members; a crown of thorns on His head and, beyond
That, a Roman soldier who stabbed a spear into His Chest..

All these without
Mentioning the humiliation He passed after carrying His own
Cross for almost 2 kilometers, while the crowd spat in his
Face and threw stones (the cross beam was almost 30 kg of weight, to which His hands were nailed).   Jesus was naked, all his clothing was removed to humiliate Him in front off everybody.
Jesus had to endure this experience,
So that you may have free access to God.
So that your sins can be "washed" away.
All of them, with no exception!


JESUS CHRIST DIED...FOR YOU!
Do not believe that He only died for those who go to church or for pastors, bishops, etc.
He died for you!
When it comes to God,
Sometimes we feel ashamed to forward a message about Him on
To others.
We are worried of what they may think.
Accept the reality, the truth, that
JESUS IS THE ONLY SALVATION FOR THE WORLD .

God has special plans for YOU!
Share this with all your friends...
About what He went through to save you.
Really think about it!
May God bless you!


That e-mail certainly describes how Jesus suffered during His crucifixion.

But, once it was determined that the crucifixion of Jesus and the other two (2) men was over, more happened.

Just as we read, in John 19:33-42, "But when they came to Jesus, and saw that he was dead already, they brake not his legs:
34 But one of the soldiers with a spear pierced his side, and forthwith came there out blood and water.
35 And he that saw it bare record, and his record is true: and he knoweth that he saith true, that ye might believe.
36 For these things were done, that the scripture should be fulfilled, A bone of him shall not be broken.
37 And again another scripture saith, They shall look on him whom they pierced.
38 And after this Joseph of Arimathaea, being a disciple of Jesus, but secretly for fear of the Jews, besought Pilate that he might take away the body of Jesus: and Pilate gave him leave. He came therefore, and took the body of Jesus.
39 And there came also Nicodemus, which at the first came to Jesus by night, and brought a mixture of myrrh and aloes, about an hundred pound weight.
40 Then took they the body of Jesus, and wound it in linen clothes with the spices, as the manner of the Jews is to bury.
41 Now in the place where he was crucified there was a garden; and in the garden a new sepulchre, wherein was never man yet laid.
42 There laid they Jesus therefore because of the Jews' preparation day; for the sepulchre was nigh at hand." 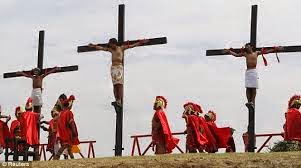 Just as we read today, prophecy was fulfilled.  And, so was God's plan of redemption for us.

Jesus is the only way to gain eternal life.  There is no other way.

Please know... it is my heart's desire that you will gain salvation.  May God bless you.

As for me, I am thankful for Good Friday.  For Jesus made a way for me, and all other people in the world to gain everlasting life.

For this, I am thankful.  Thank You, Lord!