In yesterday's Life with Lynnie (LwL) entry, I introduced you to a fellow blogger.

My fellow blogger is riding his bicycle around the world.  His name is Derek Boocock.  And, he is the writer of Derek's Bike Trip, www.dereksbiketrip.com.

As I mentioned yesterday, Derek arrived in Windsor last Sunday.

On Monday, July 14th, I picked up Derek about 9:15 a.m.  We made our way across town to a bicycle shop, where he picked up parts for his bike.  Yes, with all that riding, carrying everything he owns in the world, his bike needs repair work, now and then.

Then we drove around town.  While sightseeing in various areas, I was surprised at how knowledgeable he was, with regards to memorials, and various attractions.  This confirmed information he had given me, regarding his past life.

Being hungry, we went to Franco's for lunch.  While it is known as a pizzeria, it is also a lovely Italian restaurant.  We enjoyed their lunch buffet, and some great conversation.

Afterwards, I dropped Derek off at the home of the people who were hosting him.

On Tuesday, July 15th, I met Derek about 10:00 a.m.  This location was different.  We met at Diane Motel, on Windsor's east side.  This is where he was about to stay for his last night in town.

While check-in time is later, the owner allowed Derek to store his bike in his room.

My original plan was to take him out into the county (in other places, people would say... in the country or in the countryside, but here they say county).  The idea was to do more sightseeing of the Windsor-Essex County area.

But, after heading over to the west side, we began discussing roads.  Derek let me know his plan on heading towards Niagara Falls.

However, after seeing some of our roadways under construction, and seeing high traffic areas, his thinking changed.  I was truly happy that he decided to reconsider his plan.

We headed over to Pat & Hanks fish 'n chips shop, in Tecumseh, ON (next to Windsor).  There, my friend A joined us for lunch. 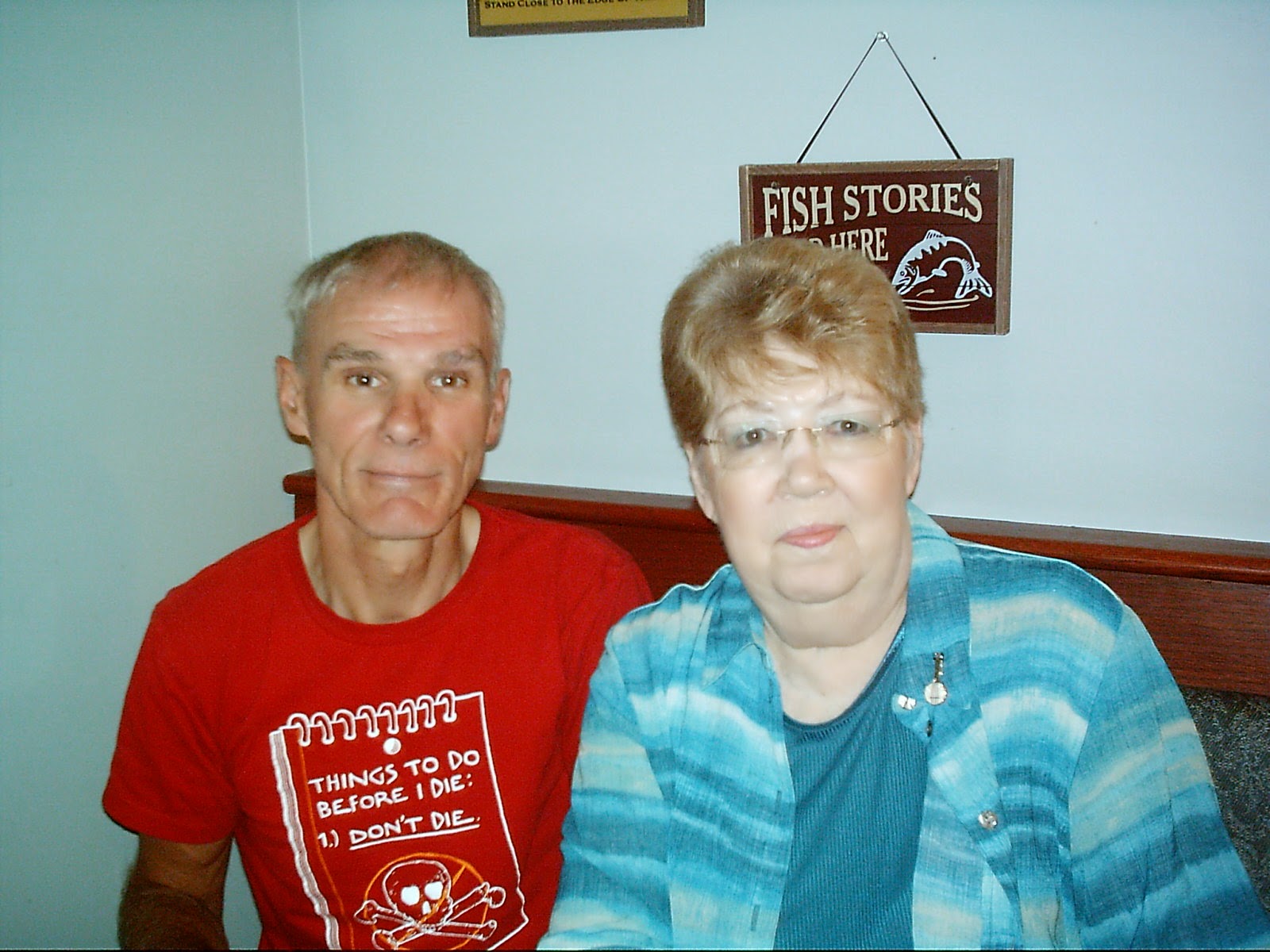 Here is Derek & my friend A, at Pat & Hanks in Tecumseh, ON

Afterwards, we did an errand for Derek.  While there, my friend A dropped by with a gift for Derek.  Thank you, A.  May God bless you, my friend.

Eventually, we made our way to my apartment building.  We went to the 2nd floor, where my building's pool deck is located.

Poor Derek had to wait for me, outside.  Hey, at least he had time to use his GPS and think about mapping a new travel plan, while sitting around the pool!

I went up to my apartment, where I not only changed into my bathing suit, but also packed up the food for our suppertime meal.  Yes, we enjoyed a BBQ meal, together.

One of my neighbours was kind to Derek.  He returned to where we were eating dinner, and gave him a souvenir.  Thank you, F!  May God bless you...

While discussing Derek's trip around the world, we discussed his health.

He's battled various forms of cancer, throughout much of his life.  After having treatment at home in England, and being told there was nothing further that could be done for him, he decided to change his life... and begin his bike trip around the world.

Upon hearing that he had terminal cancer, Derek could have gone home, and decided to not travel.  He could have just stayed home and met with people in a local pub.  And, if he had decided to do this, it would have been okay with God.

Just as He told us, in Proverbs 31:6-7, "Give strong drink unto him that is ready to perish, and wine unto those that be of heavy hearts.
7 Let him drink, and forget his poverty, and remember his misery no more."

Even though it would have been okay with God, Derek decided to not stay home and try to forget his troubles by masking his pain.  Instead, he began to focus on making his bike trip around the world... trusting God to help him.

As I've said many times in the past, life isn't easy.  And, it's not kind.

But, our Lord is there for us.  He's there for all who believe upon Him.

I'm grateful that Derek trusts in our Lord, Jesus Christ.  For, he is saved and will spend eternity in Heaven, with our Lord, at some time in the future.