If you read Life with Lynnie (LwL) for quite a while, you'll know that I wrote about the boarded-up houses problem, on Windsor, Ontario, Canada's west side.  Over near the bridge, where one of my daughters lives.

Although, I must admit that I didn't write often or much about the issue here on LwL, because I didn't want to be accused of interfering in the issue.  But, my Facebook (FB) friends sure know how I felt about it.

Four more dilapidated Windsor properties have a date with the wrecking ball after city council approved the latest batch of demolition orders for derelict structures.
"Most councillors would like to see more of them demolished," Ward 4 Coun. Alan Halberstadt told The Star.
The four rundown and longvacated homes are at 546 Aylmer Ave., 872 Chatham St. E., 1503 Hickory Rd. and 1010 Wyandotte St. W.
It was just nine months ago that city council approved amendments to Windsor's property standards bylaw, which included adoption of a "blight mitigation strategy" that included a death list compiled by the building department of residential structures defined as derelict, meaning they have been abandoned for more than two years or damaged by fire, storm "or other catastrophic event" and considered beyond repair.
Windsor's chief building official, Lee Anne Doyle, said about eight of the worst derelict homes have been demolished and cleared since last year's toughening of the bylaw, and the current active list totals 32 city properties, including a number in the shadow of Caesars Windsor downtown.
"We've got some catching up to do," said Doyle. Until council approved the bylaw amendments last November, the situation "had to be extreme" before the city would actually move in with the bulldozers.
Putting up with derelict buildings doesn't come cheap, and all four of the latest properties share a "substantial history" of complaints to city bylaw officials, according to a city hall report. Collectively, the four properties sparked more than 200 visits by city inspectors and bylaw enforcement officers over less than the past decade.
Doyle couldn't say that enforcement may have cost taxpayers, but each visit would have normally equated to three hours of administrative staff time, which means less time for other duties.
Doyle said a report is being prepared for the 2013 city budget session which will look at charging property owners for bylaw and property standards enforcement.
Generally, derelict properties are those in which the owner has walked away. The four properties about to be demolished collectively owe about $25,000 in unpaid taxes and late penalties.
With the owners ignoring city orders and apparently walking away from their properties, city taxpayers will be on the hook for the demolition costs, which in the case of the current four on demolition row add up to about $38,000 based on contractor quotes supplied to the city.
Ridding Windsor of residential blight makes for "a more attractive city ... and a safer one too," said Doyle. Derelict buildings can attract vandals and firebugs.
Halberstadt said he's regularly advised by constituents on candidates for the blight list, and he's got his eyes on an apartment building in the 1400 block of Cataraqui Street he said has stood vacant at least the past six years.
Doyle said councillors or any citizen is welcome to report blight and that her inspectors would investigate. She said the blight list is already being updated for a report to council later this year.
dschmidt@windsorstar.com or 519-255-5586

You may be wondering why this is an important article to me.  Well, it has to do with the fact that the City of Windsor seems to be treating some people better than others.

After all, in my daughter's area, there are still 130 boarded-up homes.

Yes, you read correctly.  130 boarded-up homes.  And, they are not all together.  There are occupied homes in the midst of this horrid and dangerous area.

How would you like to live in the midst of this: 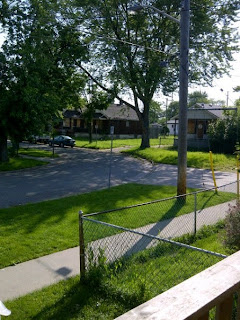 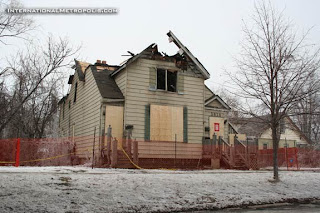 No words need to be said; the pic says it all...
In her area, housing prices have been drastically reduced, due to this problem.  But, that is not the only issue that is a problem.

Those who live amidst this problem do not live in as safe an environment as our mayor and his family does.  Nor, the elected councillors and their families.  And, any other government representatives.

In my opinion, the above article proves that the City of Windsor, has no care or concern for anyone who lives and/or owns property in that area.

Why do I think this?  Well, read the article.  It speaks about properties in other of Windsor's areas, that are being demolished.

Yet, the City of Windsor, refuses to deal with the problem on Windsor's west side.

It turns my stomach and breaks my heart thinking that people who possibly elected them, but definitely taxpayers who financially support them, are being hurt and their elected officials do not even care.  If they did, this problem would have been addressed a long time ago.

It makes me wonder if they even have any idea that they are literally destroying part of our city.  And, the city's reputation, in the public eye.

Not just to those here in Windsor, but anywhere and with anyone reading about this problem.  Or, for those who may be considering relocating to our city.

After all, even if they are not looking to live in this area, they can see the bigger picture... that when there is a major problem that occurs, the City does nothing.  And, people suffer.

Don't they realize that they are tearing apart our city and dividing the people?

It seems none of these elected officials care in the least about the taxpayers, who live in the area near the Ambassador Bridge.

Please know that I do not hate those who have power and authority.  Although I detest what they have done and are still doing, by doing nothing to end this problem, I feel badly for them.

After all, everyone, including them, will have to stand before Christ in the day of judgement.  And, they will have to answer for how they have hurt people.

In the meantime, all I can say is that even though I have forgiven those involved, I will never trust any of them.  And, I will never vote for any of those elected people who have uncaring hearts.

Even so, I pray for them, just as I do others.