Here on Life with Lynnie (LwL), and indeed every day of my life, I praise God for Good Friday! 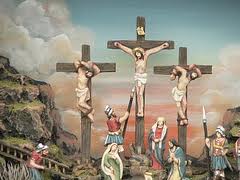 Judas Iscariot betrayed Jesus, in the garden of Gethsemane.  His disciples forsook Him and fled.  He was led away to Caiaphas, the high priest, where He was accused of blasphemy, due to being called the Son of God.

Some people hate Jews for crucifying Jesus.  I do not.  Nor, do I believe anyone should feel that way.

Thank you, Lord... for being obedient to God the Father and for coming here to earth, knowing full well what you would face.  Thank you for being obedient, even to death on the cross, as we are told in Philippians 2:8.  In Jesus' name we pray.  Amen.