If you know me in real life or are a Facebook (FB) friend or a regular reader of Life with Lynnie (LwL), you'll know that I am a person in support of our military, who not only protect us, but who have stood and fought for the cause of freedom.

I've said it before, and I'll say it again... freedom is not free.  It comes at a cost.

Certainly, those who fought for freedom in wars around the world and lost their lives, paid the ultimate cost.  And, so did their families, left behind.

Lives were changed.  Those who fought and survived suffered in many ways that those who died, did not.  Families suffered, as well.

The truth is, those who stood for freedom, whether they lost their lives or not, paid a great price.

Especially during WW2, at Dieppe, France on August 19, 1942.  Here is a LINK to read more about Operation Rutter (I have no idea why they selected my maiden name!), later called Operation Jubilee.

In today's Windsor Star, there was an article on the front page entitled, Secret files hint at other objective.  Above the photo of Canadian Army and Essex Scottish veteran Howard Large, it reads:  Was Dieppe A Spy Mission?  Here is a LINK to the story.  Please know that included on this link, there is a two (2) part video of Howard Large that you can watch and listen to his recollections of that fateful day, 70 years ago, tomorrow.

Had the story been shorter, I would have posted it here for you to read.  But given the fact that it is quite a lengthy story, I could not post it.

What happened at Dieppe, affected many, many people here in Windsor, Ontario, Canada.  The Essex-Scottish division of the Canadian Army was stationed here.  So, almost everyone here in town either had a relative enlisted with the Essex-Scottish, or knew of someone who was a member of this division.

Including my now deceased husband, Gordon.  No, he hadn't yet been born at the time of WW2, but he had two (2) relatives who were members of the Essex-Scottish.  His uncle J, who everyone called... B.  And, his uncle Johnny.

B was with the tank division that landed at Dieppe that fateful day.  Uncle Johnny was a radio operator, who also landed on that stony beach.

Unlike the majority of Canadians who landed there to be slaughtered, they both survived the landing.

While I do not know many details about B's landing with the tank division, I do know he was taken prisoner of war.

Uncle Johnny, made it up the beach, over the wall, across the promenade and arrived at the casino, before being taken prisoner of war.

Yes, they both suffered BIGTIME!

When Gordon and I visited Dieppe, Gordon decided to walk the stony beach at sunrise.  He told me that even just carrying a light video camera, he struggled along the slippery stones wondering how on earth any soldier could have made it, carrying the load of equipment, and ammunition they were loaded down with.

Of course, the truth is, most did not make it up to the shoreline above this stony pathway.  Most gave their lives that day.

Here is a couple of pics showing you what this beach is like: 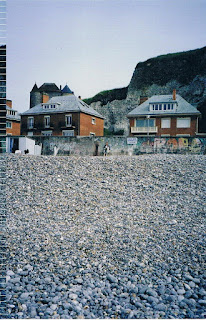 This rocky beach is slippery when wet and hard to walk upon.
Notice the wall at the top of the beach. 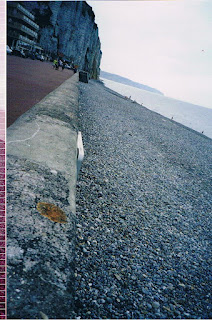 Here's where the slippery stone beach meets the wall, with the promenade on the other side.
While I praise God that both Gordon's relatives made it through the day alive, I know that they suffered.  Not just as prisoners of war, either.
No, I won't go into detail, here and now.  I will say that I am forever grateful to those who risked and/or gave their lives.
It may be too late to pray for the majority of people who participated that day, but those still alive I pray will become saved by trusting in Jesus, if they aren't saved, already.
This reminds me of another Bible verse.  One that most people are familiar with.  Proverbs 3:5, "Trust in the Lord with all thine heart; and lean not unto thine own understanding.  In all thy ways acknowledge him, and he shall direct thy paths."
I praise God for giving us His Word, the Bible.  And, especially for sending His only begotten Son, Jesus Christ, to die for our sin, and the sin of all who believe.  Please, if you are not already doing so, trust in Jesus Christ and in Him, alone.  Today.
Until next time...
If you would like to comment, please e-mail:  lifewithlynnie@gmail.com
﻿
﻿
﻿
﻿
﻿
Posted by Life with Lynnie at 6:12 PM