Oops... I must apologize for interrupting yesterday's train of thought in my Life with Lynnie (LwL) entry.  Why?  Well, today is a special day!

Yes, it's special, because it is June 6th, my friend M's birthday; she lives in Florida, USA.  We have quite a history, together (especially from when she lived near Dayton, Ohio)!  Happy Birthday, M!

However, it is a special day for another reason.  It's the 68th anniversary of the D-Day Invasion.

To some people, this may not seem special, but in my mind, it is.

After all, if Hitler's Nazi regime had won WW2, the lives of those living in Europe, would be very different, today.  I believe that even our lives, here in N. America, would be different, too!

So, where and when did the end of WW2 begin?

The beginning of the end of WW2 began in Normandy, France.  68 years ago, today!  In fact, for Canadians who participated in the D-Day Invasion, it began in a village called Courseulles-sur-Mer, where Juno Beach is located.

To give my American friends an idea where this is in relation to where their soldiers of freedom landed, it is along the road a few minutes away from Omaha Beach.

On several occasions, I've been in Courseulles-sur-Mer; each time, with my now deceased husband, Gordon.

We walked the beach where much blood was shed.  We saw German bunkers still there, at intervals along the beach.

We stayed at a hotel, where our room overlooked the road my dad drove his gasoline (petrol, to my British friends!) truck.  We saw the wall my dad told us he drove by, that had been damaged by bullets; yes, the proof is still there.

Without the bravery of those who fought for freedom of others and indeed for our future freedom, we probably would not have the lifestyles that we have, today.

Thank you.  Thank you, to all service personnel and thank you to all underground citizens who contributed to defeating the enemy.

Here are some pics from one of my trips (I apologize for them not being perfect!): 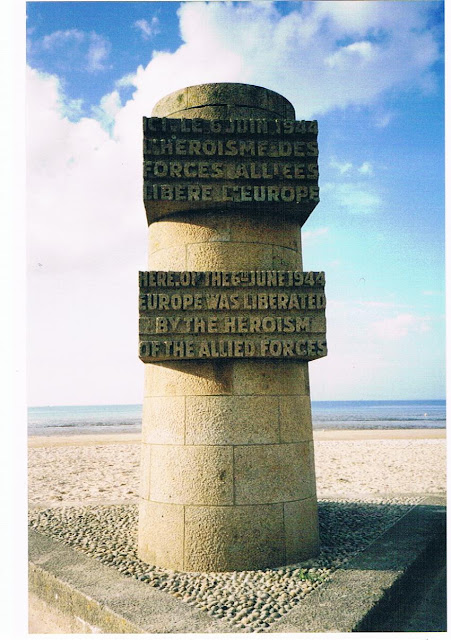 This monument is at Juno Beach, at Courseulles-sur-Mer.
It reads:
Here on the 6th June 1944
Europe was liberated
by the heroism
of the Allied Forces 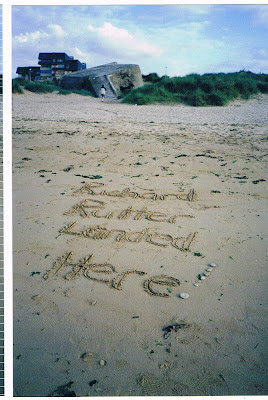 Juno Beach at Courseulles-sur-Mer
where my dad landed. 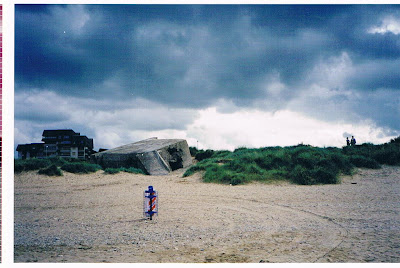 Yes, this is a damaged German bunker; one of many still lining the beaches of Normandy.

When my dad crossed this bridge it was a pontoon bridge.  On the left, at the far corner of the intersection, is the hotel where we stayed; our room overlooked this roadway.  Follow the roadway straight along and you will see the wall my dad spoke of, still damaged from bullets. 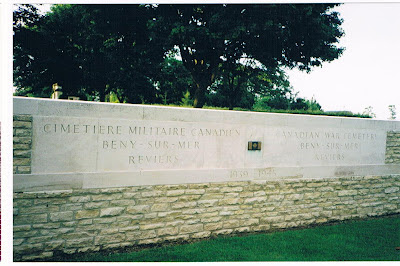 This is the cemetary, in nearby Beny-sur-Mer, where 2,025 Canadian heros are buried. 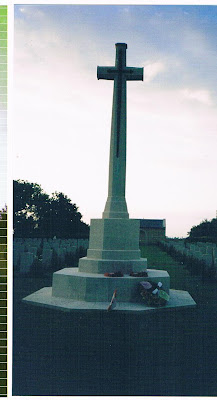 One view from inside the cemetary at Beny-sur-Mer.
Did you know that French school children visit the Allied Forces cemetaries and maintain the graves?

While there, and again today while reviewing photographs, I was reminded of John 15:13, "Greater love has no man than this, that a man lay down his life for his friends."

Friend, all Allied Forces personnel risked their lives for freedom; yours and mine.  Many gave the ultimate sacrifice and are buried in locations like the one shown here.  I truly thank God for each person.

You need to realize that Jesus gave the ultimate sacrifice for you.  He died and was resurrected, so that you could live with God, in heaven with Him, for eternity.

F-o-r-e-v-e-r, is a very... long... time.  I escaped the prospect of hell for eternity, with no chance of leaving there, by trusting in the work Jesus Christ did on the cross of Calvary.  You can, too.

In order to join me in heaven for eternity, all you need to do is believe on the Lord, Jesus Christ... and you shall be saved (Acts 16:31).