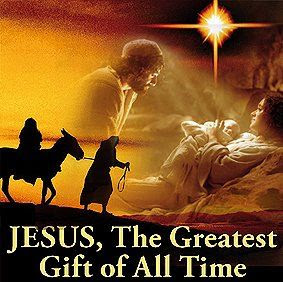 This past Sunday was Sonday; my Lord's day!

Awaking much earlier than my alarm, I got up, turned on my computer and went on FB for a short time.  After chatting with a few FB friends online, my phone rang.  It was still rather early in the morning, as the sun was not yet up.

But, when it was a long-distance ring, I knew who it was.  Yup!  It was my FB friend from Germany!  We spoke for a while.  She knew I was up early, because she had also been on FB, so she decided to call me.  How nice!  Thank you for calling, I!

Eventually, I decided to shower and get ready for church.  Normally, I worship at my own church, but last week I didn't, due to other things happening with friends at other churches.  Today, was the same.

Earlier in the week, my friend M had invited me to worship at her church, just up the road from mine.

Okay, it wasn't really for worship, of a typical kind.  Her church group was putting on a play.  Well, that's what they called it, but considering there was music in it, it was sort of a musical/play.  About the birth of Christ, of course!

Here is a pic of some of the angels who participated in the play.  My friend M, is the blonde angel at the front left side: 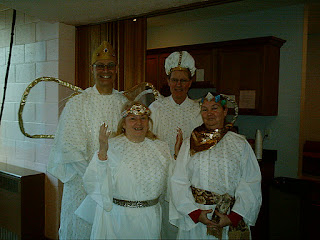 Actually, the play was different.  Not your typical play about Jesus' birth!

This pic shows the shepherd (in red and gold), along with sheep and angels, awaiting Mary, Joseph and baby Jesus: 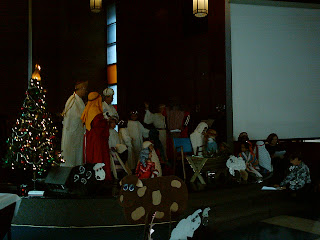 This pic was taken when, as a shepherd sang Silent Night, all the sheep began to interrupt, crying baa, baa, baa, repeatedly.  As a result, the shepherd commented that she would stop singing, because it truly wasn't a silent night, with all the sheep making so much noise!

This final pic was taken once Joseph, Mary (seated) and baby Jesus had arrived: 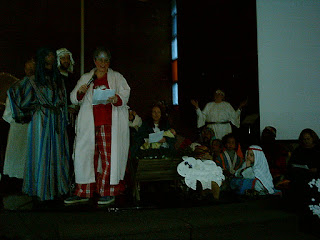 What you cannot see in the pic above, is the three (3) kings.  They were standing off to the right, in front of the white screen you can see.

As the kings sang We Three Kings (of Orient Are) they played guitars.

For the first verse, they sang the Christmas song, as it is normally sung.  However, when they played and sang subsequent verses, they broke into various forms of musical types, delighting the crowd!

Afterwards, everyone enjoyed cupcakes and ice cream, together.  Well, almost everyone.  My friend M and her sister K, were busy packing away costumes.

After enjoying some fellowship with M's husband D and a couple of other people, I made my way home.

Thank You, Lord... for always providing for me, even in these lonely times.  I am truly grateful for Your love.