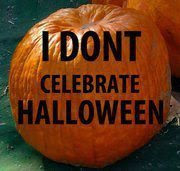 For some people, especially children, it is a day when they can fill their sweet tooth.  After all, isn't that what those people will tell you Trick or Treating is all about?

For others, October 31st is a special day for another reason.  To Christians who know, it is a day that remembers when Martin Luther nailed his 95 Theses to the door of a church in Wittenberg, Germany in 1517.  This began the reformation.

If you would like to read/find out more about the reformation, and/or Luther's 95 theses, feel free to google it!  For starters, you may want to click on this link: http://en.wikipedia.org/wiki/Reformation_Day.

When I was a child, I grew up in a home where people considered themselves to be Christians.  Yet, reading of God's Word, the Bible, was never done.  You may be aware that my dad rarely worshipped at church; my mom grew up in a church environment where people believed they could contribute to their salvation.

Whenever we moved, and it was often, we worshipped at various churches, or no church at all.  In one way, it was good that this happened, but in another way, it wasn't.  While I learned a variety of ways to worship, it also shows that my parents knew nothing of doctrine.  Otherwise, attending various churches would not have happened.

As I've mentioned in the past, one of my grandmothers used to read tea leaves and had psychic tendencies.  Growing up, this was the norm.  Not once did any of my relatives ever tell me this was wrong.

This is how I know that my family had never really read/studied the Bible.  More about this, later.

Consequently, I was like almost every other child in my neighbourhood.  Every Halloween, I dressed up and went trick or treating.  Never, did I ever think anything was wrong with this.

As an adult, when my children were young, I still thought like this.  As a result, my daughters learned it was okay to dress up, go trick or treating and generally celebrate Halloween.  Unfortunately.

Why do I say this?  Because, after rededicating my life to Christ, and after reading God's Word and attending Bible study, I came to know the truth about what God thinks.

Now, as a more mature Christian, I know that no one should not participate in anything to do with the occult.  Not Halloween, not readings, not psychic stuff.  Nothing.  God considered the occult as one of the abominations, to Him.

To read more about this, google it.  Or for a brief overview, click on this link:  http://christiananswers.net/q-eden/edn-occult.html.

While the majority of people I know of, where Halloween is celebrated will be participating, I won't be.  Hopefully, you won't, either.  In my opinion, while most people think about Halloween in reference to treats, I believe it is one of the devil's biggest tricks.

Posted by Life with Lynnie at 5:57 PM