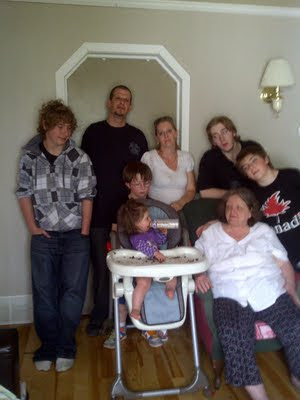 Happy 1st Birthday, A!
Surrounding my granddaughter A (who is covered in Birthday cake!) from L to R, is A's brother N, A's Dad S, A's Mom (my daughter, B), A's brother T and A's brother J.
Immediately behind A, is her brother A.  Beside A is her other Grandma.
In you've been reading Life with Lynnie (LwL) on a regular basis, you will know that I posted an entry for May 11th, with a pic of my family celebrating my granddaughter A's first (1st) birthday!

On Thursday, when I went to post my daily entry, I was able to access Blogger to write the entry, but by the time I went to post it, Blogger was no longer available.  Apparently, they had to do some updating to the system.  So, thankfully, I saved what I wrote elsewhere; I will post that entry, shortly.

However, during the course of the evening, during the updating, something happened.  They dropped the blog entry for A's Birthday.  Today (Friday) when I went to post yesterday's entry I thought they would have recovered it, as per their message, yesterday.  For some reason, this didn't happen.  In any case, I am rewriting an entry for A's birthday.

On Tuesday, I had a much busier work day, than is normal for me as of late.  I worked right up to midnight!

Exhausted as I was, I could not go to bed and catch some sleep, because I had promised to bake a birthday cake for my granddaughter A, who was turning one (1) on Wednesday, May 11th!

Consequently, I was up til after 2:30 a.m.  After baking the cake, I had to let it cool, so I did more paperwork for the deal I was working on.  Then, I iced and decorated the cake.

In any case, instead of meeting at B's home as we normally do for birthday celebrations, we met at her Dad's and Grandma's home, since it was A's 1st birthday.  This way we could together, all share in the joy of celebrating A's 1st birthday.

On the way, I picked up pizza so we could truly celebrate as a family, sharing dinner, also.

Of course, when it came to cake time, A enjoyed eating her 1st slice of birthday cake, celebrating the first of her special days.  As per normal, she wore much of it!

Being totally worn out, I thought I might go to bed earlier than normal.

I praise You, Father and thank You, for allowing me to have such a great memory.  I'm truly blessed.