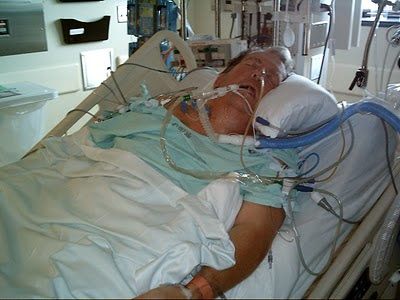 On October 1, 2010, I wrote about the day Gordon collapsed, for it was the one (1) year anniversary of Gordon's collapse.  If you would like to read the entry, it is entitled Last Hug...

Since it took until well after midnight, making it then Oct. 2, 2009, before Gordon was able to be admitted into hospital, I can safely say he was hospitalized eight (8) days at Hotel Dieu/Grace Hospital, here in Windsor.

It took several hours before I was allowed to visit with him.  A Salvation Army chaplain came and sat with me, through most of the time.  She was such a loving person, who prayed with me and encouraged me.  When she realized I had a walking limitation, she even arranged for me to have sole access to a family room, right beside the entrance to the Intensive Care Unit (ICU), so I could have a place to rest throughout the days and nights I spent at the hospital.  This was such a blessing to me.  I will be eternally grateful for this.

At first, the ICU staff allowed me to sit at Gordon's bedside, talk with him, pray over him (aloud) and read the Bible to him.  Some staff didn't really like this, but I was allowed.  It was simple to see who was Christian and who wasn't.  The Christian nurses were very kind and spoke with me about Jesus.  Those that weren't, sometimes sighed heavily and/or left the room while I was praying or reading the Bible.

Upon re-entering his room, I would look on his hand(s) to make sure the note I wrote there was still readable.  Some nurses would leave my writing there; others would rub/wash it off.  I always wrote what Gordon had done to me, whenever I had any surgery:  Jesus loves you and so do I!  Love,  Lynnie xoxoxo only, when Gordon wrote it to me, he would sign it, on my hand.

The niceness seemed to fade when a couple of days later, I wanted to speak with a doctor, for a physician had not yet even spoken with me regarding Gordon's condition.  It took another day or so, before this happened.  In between, I began to be refused access to my husband, from time to time.

The meeting with the doctor and a nurse provided to be a disaster.  Instead of hearing about his progression/stabilization, like some of the nursing staff alluded to, I faced a request to take Gordon off life support and let him die.  I refused.

In an attempt at convincing me, a Neurologist was called in and a CT scan taken.  The Neurologist showed me Gordon's CT scan; he claimed it showed brain damage.  I asked to see a CT scan of a healthy brain or even a photo, but due to privacy, they claimed they could not show me one.  I asked the Neurologist if what we were looking at was absolutely, positively brain damage, or if it could be swelling, to which he replied that it could indeed be swelling of his brain showing up.  Again, I refused, saying I would like to see a comparison in a few days.

The floor manager pleaded with me to reconsider; the physician explained that if they allow Gordon to fully stabilize, then he wouldn't die when removed from life support.  This sounded good to me.  Remember, I wasn't convinced it was brain damage showing in Gordon's scan.  Remember, I had an infant grandson that God cured of brain damage and who is, even today, an intelligent child, who will probably make a great doctor some day.

It became evident that I was being prevented from seeing my husband.  Even during visiting hours, when I would buzz to enter, I would be refused permission, while throngs of people were granted access to their loved ones.

Still, I refused to pull Gordon's plug.  I truly did not want to play God.  I asked if it was possible for him to die, even while being on life support; the reply was that he could.  That did it for me.  I wasn't going to play God.  If God wanted him, He would take him.

Then, I was told that I was absolutely was NOT going to be allowed in to see Gordon throughout most of the day.  I waited for hours, even during the daytime to be allowed in to see him.  Some visits were shortened to even just a few minutes at a time, even though it was during visiting hours.  I can only say that I believe I was being punished for not doing what the staff wanted me to do.  Take Gordon off life support.

Well, just after I managed to get to sleep in the middle of the night, the phone rang.  Gordon had taken a turn for the worse; I was told to call whoever needed to be there to see him and get there myself as soon as possible.

Gordon's son, my daughter P and I met at the hospital.  As soon as I stood beside Gordon's bedside, he stabilized, once more.  P noticed before I did and spoke up about it.

Then, the floor doctor wanted to meet with us, privately.  We, along with Gordon's floor physician, the floor manager, a couple nurses, all met in a boardroom, where she plainly told me that the decision to remove Gordon from life support was no longer mine to make, for the hospital was going to remove him from life support whether I liked it or not.

My first thought, was not of Gordon, nor myself, but rather it was:  Are we living once again in a Nazi era, where the people had no rights?  Where the elderly and disabled were considered of having no value and were exterminated.  It was clear that no matter what I could have said, it would have made no difference, so I just silently prayed.

I requested another CT scan be done to see if there was any improvement.  They agreed to do this, for my sake.  The updated CT scan done that morning, showed that it was indeed swelling in Gordon's brain, for the swelling had reduced somewhat.  However, I was told that where the swelling had decreased, those areas of his brain were filling up with blood.

The doctor said they wouldn't be callous about it; they would allow us time to bring other family/friends to say goodbye.  His death was scheduled for about 4:00 pm, on that day, October 9th.

After the medical staff left, the transplant staff arrived.  Gordon had been a registered donor.  They explained procedure to me to prepare me, letting me know that they don't wait for the donor to die.  They take the live donor into the operating room, remove the organs for transplant use, then allow the body to die.

Gruesome thought to say the least.  With every breath I struggled to take in, I prayed God would help me through this day.

Apparently, they could not even schedule the operating room until they knew the transportation team were on hand to dash off with Gordon's organs.

Gordon's son said he didn't want to be there.  We managed to reach Gordon's adult granddaughter, who met P and I at the hospital; there was no one else to call.

I should tell you that even though the staff knew this was to be my husband's final day on this earth, they still prevented me from seeing him.  At one point mid-afternoon, they were doing what I called playing games.  I would buzz to enter; they would refuse, telling me to buzz back in 20 minutes or so.  I would do as they requested, only to be told the same thing again, over and over.

Finally, my daugher P and I took it upon ourselves to just enter ICU when other people were entering.  I complained to everyone/anyone who would listen.  They finally allowed me to stay for a few minutes.

Even after 6:00 pm, the transplant team had not yet arrived, so Gordon had somewhat of a reprieve from death; but, I hadn't.  Even at this time, the nursing staff were refusing me access to my husband.  It had been a couple of hours since they had allowed me to see my Gordon.  I walked in with other people entering and created a scene.

Okay; it truly wasn't a scene.  I did raise my voice and make my point clear.  I asked Gordon's nurse how she would like it if it were her husband lying in the bed, instead of mine.  How would she like it, if she knew her love's life was going to be taken from him and the nurse and the hospital staff treated her the way they were treating me?  I asked her if she wouldn't want to spend every second she could with the man she loved.

I didn't mean to make noise, but I needed to speak up and was so hurt and frustrated that they would keep me away from my Gordon, even though at any moment the transplant team could arrive and he would be taken to die.  I told them I thought this was cruel, that I wouldn't wish this on my worst enemy and told them that I pray nothing like this would ever happen to them.

I felt like they were stealing what was to be my last day with my husband, precious time that could never be replaced and told them so.  After all, every minute is important, when there is only an undeterminable amount of time left, possibly minutes.

It was only after this, that I was given permission to sit with Gordon at his bedside.  Once I calmed down, I apologized and told the nurse I was thankful to be with my husband.  My pastor arrived.  Together with P and Gordon's granddaughter, we prayed, talked to Gordon and read the Bible.

From time to time, my heart would sink, when I saw the transplant team arrive.  However, each time, they told me there were some problems in London and the transportation team had not yet arrived.

Time passed like this, until about 11:45 pm.  The transplant team showed up once more.  This time, they had different news.  The London team would not be able to make it, so since Gordon had a rare blood type, they didn't want to lose the organs; they found out the Toronto team wanted his organs.  They were preparing to send a plane to Windsor to pick them up.  However, before final approval for the plane could be given, they had to check Gordon over one more time.

This was when we found out that Gordon's body was beginning to shut down on its own; his kidneys were beginning to fail.  His life was about to end.  The transplant people confirmed that because of this, they could no longer use his organs.

The medical staff told me they still would not let him die on his own; they were still going to (in my opinion) kill him, or maybe I should say, pull the plug.  I was told that at midnight, they would remove all life support, except the breathing tube and Gordon would be given an IV Morphine drip.  After about 15 minutes of being on the Morphine, the staff would remove Gordon's breathing tube.

This is exactly what happened.  I knew Gordon was dying, for I could see the colour draining out of his face.  He was pronounced dead at 12:30 am, Saturday, October 10th, 2009.

My pastor, Gordon's granddaughter, my daughter P and I all exited the hospital shortly afterwards.  I made my way home, alone, praying to God and wishing I too, had died.

Posted by Life with Lynnie at 8:53 PM